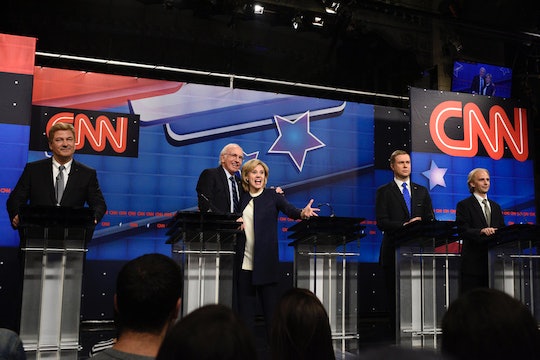 Will Larry David Be On 'SNL' All Season? Bernie Was Back, & Fans Want More

Tonight was supposed to be all about Trump, but tonight, all eyes were on Larry David! Making his second appearance as the left-wing Bernie Sanders, it has fans (and even haters) wondering one thing: Will Larry David be on SNL all season long? With the 2016 election season in full swing, comedians have fine-tuned their impersonations to give us the most of every interview and debate, and Larry David is the cream of the crop.

I know, I know, people are supposed to support politicians because of their political beliefs, but I find myself #feelingthebern because of my love for David and my passionate desire to keep him on this season for as long as humanly possible. Fortunately, it looks like the Bernie Sanders movement is going to keep Larry David yelling at audiences with all the charisma of a man with scotch in one hand and socialist ideals in the other.

There's no official word yet on whether or not David's tenure as Bernie will have him back on Saturday Night Live week after week, but here's promising that he'll be around as long as humanly possible. And, to be honest, as long as Bernie's in the race, there will be a seat at the table for Larry David. With Sanders-inspired gems like, ""I'm Bernie Sanders and I want your vacuum pennies!" and "I can't call my crush cuz it would take too long because my crush is every black person in America," there's no denying that David may do Bernie better than the Bern himself.

Heaven bless the Internet, because Larry David may here to stay!

Here are some of the best reactions fans had to David-as-Bernie's opener.