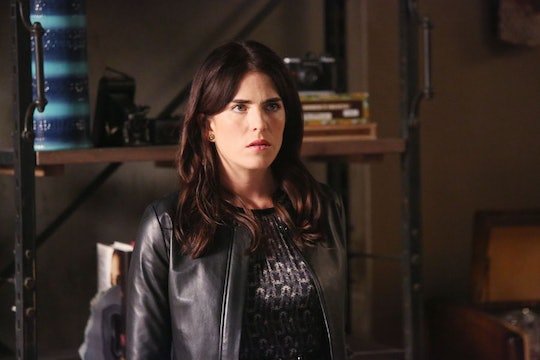 Will Laurel Die On 'How To Get Away With Murder'? Her Life Is In Danger

There was a huge reveal on How to Get Away with Murder on Thursday night. With only a handful of weeks left before the midseason break, there's not much time until we find out who is "under the sheet." Until then, though, we know one person who wasn't under the sheet, but is still in grave danger — Laurel. On Thursday, it was revealed that Laurel was inside Annalise's house during the fire and she is pregnant. But will Laurel die on How to Get Away with Murder? Right now, her life (and her unborn baby's life) is in danger.

The "reveal" that we were all waiting for came from none other than Meggy, Wes' girlfriend who may or may not be as innocent as she seems. While Meggy's presence in the hospital marks one more person who isn't "under the sheet", it was Laurel's body on the operating table that really shocked fans. Not only was Laurel inside of Annalise's house — that was burnt to a crisp — but she is also pregnant. With whose baby? That's still to be determined. But at least we know that Laurel still has a fighting chance of living and that she isn't the one under the sheet.

At the hospital, both Bonnie and Oliver were trying to get answers from the hospital staff, but really had no luck. They saw Meggy — Wes' girlfriend, I guess — who is just a student, but assisting a doctor working on (who is later to be revealed as) Laurel. She tells the doctor that the patient (Laurel) is pregnant. Then she actually sees Laurel, and the episode ends. Fade to black.

So, will Laurel survive? She was in a burning building, but perhaps the doctors got to her quick enough? If she does survive — can we really lose TWO people this season? — it will be interesting to learn who the father of her child is. Could she and Frank have reunited in the four week time frame the season is playing with? Or will this Laurel and Wes thing that has been teased since the top of the season finally happen?

Laurel is certainly becoming a larger part to the story this season, which may be part of why her life is in danger right now. Hopefully she isn't killed of... she's actually learning to be a really great lawyer — she's almost the next Annalise. We can't lose her just yet.