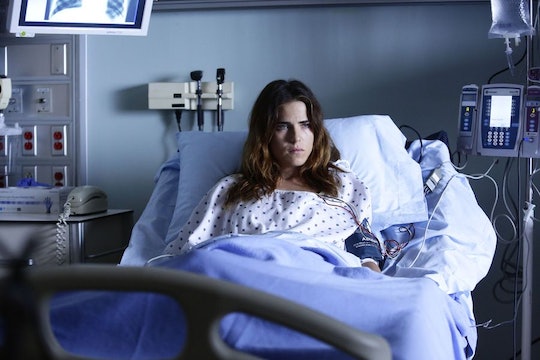 Laurel Has A Big Decision To Make On 'HTGAWM'

How To Get Away With Murder finally answered the burning (ouch, bad pun) question it had been asking all season long in its winter finale, revealing that the body under the sheet, which had perished in Annalise Keating's house fire, belonged to Wes. It's a devastating loss to the show, although the midseason return did feature plenty of flashback scenes, so maybe we'll be able to wean ourselves off of Alfred Enoch slowly. The next question that will dominate the season is #WhoKilledWes, but fans are also wondering: will Laurel keep the baby on How To Get Away With Murder?

We learned from flash-forwards to the hospital during the first half of the season that Laurel suffered some pretty serious injuries in the house fire. But we also learned, along with Wes' poor girlfriend Meggy, that Laurel is pregnant when she comes in. She's been quietly sleeping with Wes all season, but when Frank reemerges from captivity, he and Laurel have a few interactions together, setting up a potentially torturous and drawn out "who's the daddy?" storyline. Luckily, Shonda Rhimes spared us in the show's January return by having Laurel reveal to the rest of the Keating 5 (now 4) that the baby's father is Wes.

Since we never see Wes and Laurel talk about her pregnancy, it's easy to assume that she was keeping it a secret on purpose with the intention of having an abortion before anyone found out. But in a sweet flashback between Laurel and Wes, we see her stressing over a condom accident, since she's unable to take hormonal birth control, and Wes seemed gentle and supportive. It's possible that he would have been on board with keeping the baby, if Laurel wanted to, although he probably would have been supportive of her decision either way.

Michaela also reassured Laurel that whatever she decided to do about her pregnancy, she'd stand by her classmate and help her out with whatever she may need. Laurel seemed pretty overwhelmed by pain in the moment and was mostly just concerned with getting her next dose of meds. But it's still a meaningful display of solidarity from the only other woman in her cohort.

Whether or not Laurel would have opted for an abortion before, Wes' death will likely have an impact on her decision from here on out. They did both love each other and having his baby might help Laurel feel like she's paying homage to his memory and preserving his legacy. Or, carrying the pregnancy to term might be too painful and destructive for her during an already traumatic time. It may be best for Laurel's emotional health for her to grieve Wes without the added strain of being a single mom to his child. Either way, the decision is hers and it's nice to see that at least one of her friends is supportive of her no matter what. Based on what we know of Shonda, my guess is that the rest of the group falls in line behind Michaela to support Laurel, too.