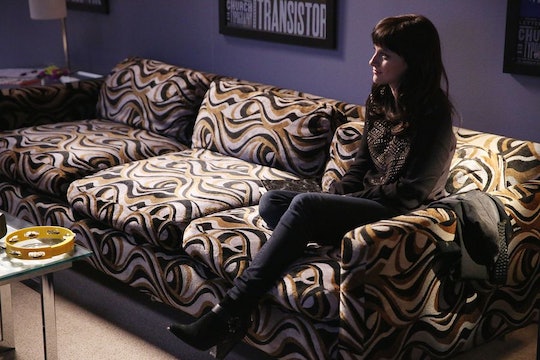 Will Layla and Avery Get Together On 'Nashville'? She Might Have A Plan

One of Nashville's biggest bombshells from its winter return was Layla Grant's revelation that Juliette Barnes was responsible for Jeff Fordham's death — and her subsequent fixation on Avery Barkley. In recent episodes, the two have been spending a lot of time together, leading to the question: will Layla and Avery get together on Nashville before the season is through? Considering Layla's sheer determination to get back at Juliette for killing off her boyfriend and manager, it doesn't seem so out of reach.

At Rayna's wedding, Luke Wheeler's son, Colt, spots Layla and spills what he saw on the night of Jeff's death. Layla suffers a total breakdown, but recovers as soon as she notices Juliette's husband — who just so happens to be a producer, while she just so happens to be cutting an album — is around. She manages to secure him to work on her new album. Wednesday's episode finds the pair in the studio together for the first time.

Layla's flirtation begins with a nice little ego-boost for Avery, whom she calls "both gentle and commanding" as a former musician-turned-producer. After a tense run-in with Luke regarding Juliette, Avery confesses to Layla that his wife is actually in treatment for postpartum depression, that he's stuck lying about their marriage to the public, and that he feels trapped.

Layla, all too eager to play the role of shoulder to cry on, brings up her own sham marriage to an erstwhile-closeted Will Lexington. She admits that it wasn't until they finally divorced that she felt free. "You deserve to feel free too," she tells Avery with a very conspicuous arm touch.

Whether or not Layla was responsible for it, Avery finally storms into Juliet's treatment facility and demands that her therapist tell her she needs to go public with the divorce. Later that night, Juliette finally releases a statement letting Avery off the hook.

Cue Avery and Layla's late night recording session — which Layla says Bucky mandated, but, like, OK — which is where Wednesday leaves the pair.

Layla's plotting is next level-fierce in the wake of the death of the love of her life, so I wouldn't put anything past her this season. And, as we all know, her manipulation tactics and spite rival even Jeff Fordham's. It looks like Layla is going to get exactly what she wants this season.