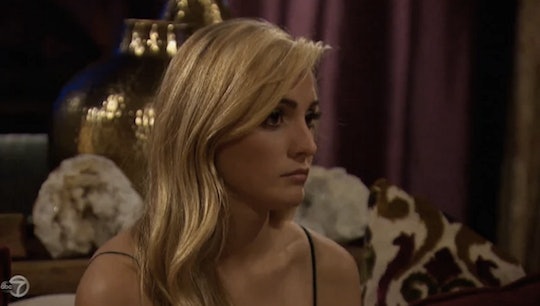 Will Leah Explain Her Black Eye On 'The Bachelor: Women Tell All'? We May Never Get An Answer

Oh, Leah, how you surprised us all. At first, Leah started out as a relatively unknown contestant on The Bachelor. That quickly changed when the pressure got too great and she felt like she needed to sabotage other's relationships with Ben to progress her own. But Leah throwing Lauren B. under the bus in the Bahamas wasn't the most scandalous thing Leah brought to the season. Instead, Leah's black eye from The Bachelor promos is the thing that deserves the attention during The Bachelor: Women Tell All — you hear that Chris Harrison?

But that was never shown on the final cut of the show. Why? That's what I'm hoping gets answered at "The Women Tell All," because that was one of the most teased moments for the show. Plus, I can't remember the last time something physical happened on the show, so you'd think ABC would want to capitalize on something so dramatic (you know, for the most dramatic "Women Tell All" episode, ever).

So, will Chris Harrison dive into this big mystery of who hit Leah in the face and possibly gave her a black eye? According to Leah's Twitter, no. Leah tweeted just a little less than a week before the "Women Tell All" episode that the black eye will "forever be a mystery," but that if we thought her eye looked bad, we "should see the other girl."

You feel that burn? That's ABC getting us good. That was such a good tease for the season and we never even learned more about it! So prepare for disappointment, Bachelor fans. It appears as if we're never going to get the answer we deserve. But know this, Bachelor producers — we will not forget. We have not forgotten about the pregnancy test of The Bachelor 2015 and we will not forget about the black eye of The Bachelor 2016.