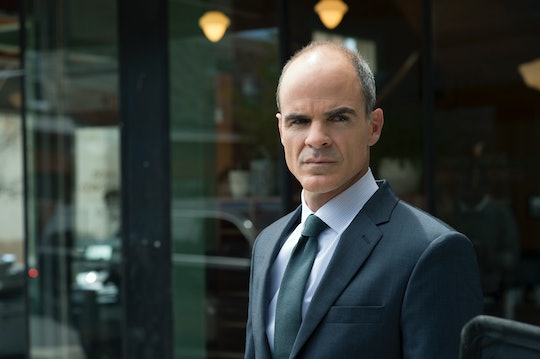 Will Leann Harvey & Doug Stamper Hook Up On 'House Of Cards' Season 4? Don't Rule It Out

After killing off his only love interest on the show, I wondered whether House of Cards would give President Underwood's Chief of Staff someone else to fawn over — and really, I didn't have to dig too deep to figure that out. After meeting Leann Harvey in Episode 1 of Season 4, the question has to be asked: Will Leann Harvey and Doug Stamper hook up? House of Cards' most loyal and lethal Underwoodite (whatever, roll with it) never had a true physical and emotional relationship with Rachel (at least in the way we'd traditionally qualify one), but it was clear that he cared about her. Though the particulars of their situation made any type of relationship next to impossible — like the fact she was an accessory to the murder of Peter Russo, was paid off by Underwood and Doug to keep quiet, and her "caretaker" ended up being her killer — it was clear that Doug felt something incredibly intimate for Rachel, even if he never did get the chance to act on those feelings.

But with Leann Harvey on the scene, could a potential romance breathe new life into Doug Stamper? It's way too soon to tell, but judging by their first initial interactions together, it's too early to rule out the possibility of a hook up.

After putting two and two together and figuring out that Claire's most likely in Texas to nip Celia Jones' bid for office right out from under her, Stamper pays Harvey a visit both to put the fear of Underwood in her and to thwart the First Lady's plans for a run. Despite the fact that my favorite part of their first meet up includes a gun Harvey just casually pulls from the top drawer of her desk, Doug greets Harvey with a joke. A real-life, mildly funny joke. I think it was the most human I've seen his character throughout his four-season lifetime, and for a guy who kills, maims, and coerces at Frank's every whim to crack a joke? That's Donald Trump huge.

Of course there's always the alternative that Doug was excited solely because he's the kind of guy who just really gets off on threatening someone's life. That joy is pretty evident when he shrugs off the whole nice-guy routine to pass the phone off to Harvey so she can get a talking-to from Underwood, but I'm a firm believer that it's still way too early in the game to call off the possibility for at least some action between these two in Season 4. Since the First Lady has recruited Harvey into her corner for a potential spot in government, she and Stamper have no choice but to work very closely to manage the Underwoods' schedules and their relationship. Beyond that, I really just want to see Stamper become emotionally invested in someone who isn't Frank, and it'd be fascinating to watch the toll it'd take on his relationship with the president.