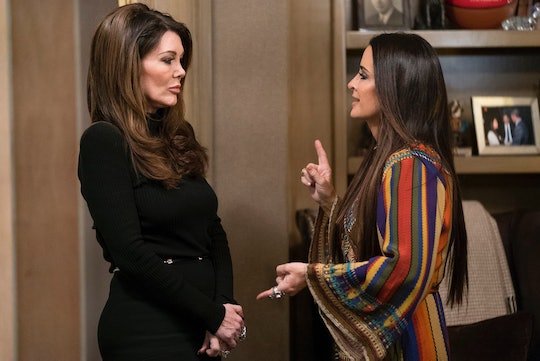 Lisa Vanderpump Feels Conflicted About Her Future With 'RHOBH'

If you're a Housewife fan, you may have heard the rumors which have been swirling for the past few months that Lisa Vanderpump is leaving Real Housewives of Beverly Hills, thanks largely to a Nov. 14 E! story which "confirmed" the OG cast member's "very likely" departure. But both of E!'s sources were anonymous insiders, and the next day, at her third annual Vanderpump Dog Foundation Gala, she hit the red carpet to set reporters straight on her future involvement.

"I am in the show. I have not quit, and if I did quit, it wouldn't just be a leaked story," Vanderpump said at the event according to Entertainment Tonight. "I would be upfront, and I have a lot of loyalty to the production company and the network."

The suggestion that she would leave after nine seasons without first letting Bravo know seemed to be what stung the 58-year-old restaurateur and philanthropist the most. To a different reporter from People at the event, she said, "Can we just trust that I would come up...I’ve never had a problem with kind of coming forward, speaking my mind."

Some of the questions around her continued involvement stem from the fact that she chose not to film with the rest of her cast during Season 9, although she did film her parts of the show on her own. Some of the Housewives say she was always invited to events where they would be filming while other sources say Lisa was excluded from the group. Per usual, it's tough to tell exactly what was happening on the inside.

But Lisa has been super upfront about what a difficult time she had filming Season 9, owing partly to her brother's recent death. It also sounds like she's experiencing some understandable burnout after nearly ten years on the show, and she doesn't really feel like she fits the Housewives archetype anymore, personality-wise. She told E! News:

Asked if she would return for Season 10, Vanderpump was similarly conflicted. She claimed that she hadn't been asked back yet, but frankly, it doesn't seem like Bravo is on the fence about her involvement. Allowing a Housewife to film basically solo for an entire season would suggest that they're willing to do anything to keep her on. And her spin-off Vanderpump Rules remains extremely popular.

"If the timing was right and I felt good about it, sure," she ultimately concluded in her People interview. "But I just…I’m not that combative, frankly! I think you’ve seen that."

Of course, a lot could change between seasons, especially for someone who's grieving. It's always possible that once her tough time passes, Lisa will rediscover what she enjoys about being on the show. In the meantime, you can catch her on Season 9 when RHOBH airs Tuesday nights on Bravo.