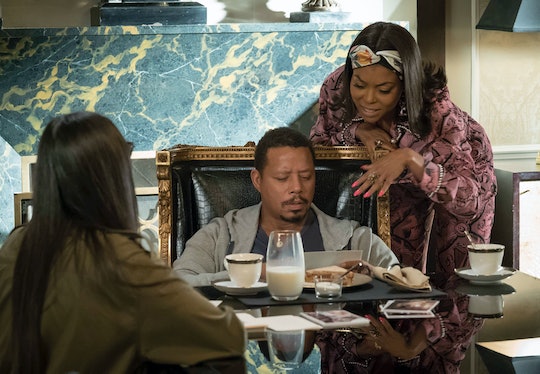 Lucious Will Face A Huge Obstacle On 'Empire' Season 4

If I've learned anything from soap operas, it's that someone always gets amnesia after a traumatic event. Not only that, but it usually ends up being a season finale cliffhanger for viewers to ruminate over for months before the show returns. Such is the case with Empire: Season 3 left off with Shyne and Andre's plan to kill Lucious backfiring — but they did do some damage. After their orchestrated car explosion, Lucious was left in a coma. When he woke up, he couldn't remember anything. So will Lucious get his memory back on Empire? He will still have amnesia in the season premiere.

I'll backtrack a little: how did Shyne and Andre come up with this plan in the first place? Andre went through some trauma of his own last season. His wife, Rhonda, was murdered in the season premiere (and everyone forgot except him! Did she even get a funeral!?) and he wasn't managing his bipolar disorder well. As the season went on, he became colder and more Machiavellian in his actions and pursuits. He wanted to control Empire Records since the show began, but last season he was willing to play dirty; he started collaborating by Shyne Johnson. Shyne is Lucious' longtime rival, but it wasn't until Season 3 that actor (and rapper, and Pimp My Ride host) Xzibit was promoted to a series regular.

In the midseason finale of Season 3, Andre revealed to Shyne that he wanted to kill Lucious. "Now having lost his wife and lost his child, Andre has become the most ruthless one — and he’s learned a lot from his father, too," Empire executive producer Sanaa Hamri told TVLine. "So I believe he’s the most dangerous character on our show right now." Throughout the rest of the season, Andre and Shyne took to scheming. In the season finale, they finally set it up: a bomb in Lucious' car after the album release party for Inferno.

Ironically, Lucious and Cookie had just decided to give Andre control of Empire right before the explosion occurred — which is exactly what Andre wanted the entire time. After Andre found out, he tried to call of his and Shyne's plan, but it was too late. The bomb went off and the final scene showed Lucious in a coma. He's in the care of a nurse named Claudia, played by Demi Moore. When he wakes up he has no idea that it's his family who's looking at him. According to Variety, Season 4 picks up three months after this scene. Lucious still does not have his memory back, but it just so happens that it's the 20th anniversary of Empire.

"It really sets the template for the season," showrunner Ilene Chaiken told Variety about the premiere. "In this episode, it serves as the framework for telling the story of where Lucious is and what it means to everyone." Chaiken also explained the theme of this season as a whole: "Who is Lucious now, and who will he become, and what has he lost? What is the family, but especially Cookie, doing in the face of the aftermath of Lucious’ injuries?"

So, it's evident that Lucious does not have his memory back yet. Will he ever? Chaiken gave no indication, but this is definitely not an issue that's quickly solved in the season premiere. It seems that Lucious, and everyone in the Lyon family, has to face the reality that he may not be the same person ever again. Seeing as the theme of this season revolves around Lucious, this may be an issue throughout Season 4. I wouldn't bank on Lucious magically remembering his family early on, but hopefully with the help of his nurse and his family, he's able to be himself again.