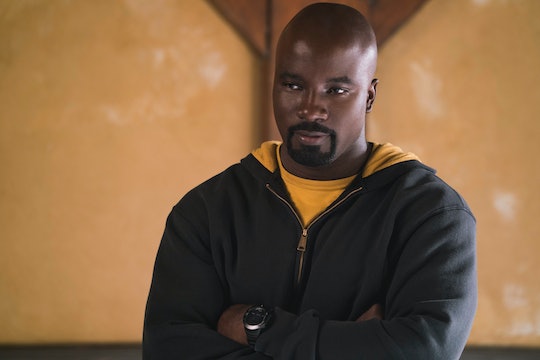 'The Punisher' & 'Luke Cage' May Deliver An Interesting Crossover

A new Marvel series has made its way to Netflix. The Punisher follows Frank Castle, who was first introduced in the second season of Daredevil. Unlike most of the other vigilantes fans have come into contact with thus far, Frank has no problem killing people to get what he wants, which will probably make this series much darker than those that came before it. As always, fans are already wondering which characters from the other Netflix Marvel shows will make an appearance in the new series. Specifically, is Luke Cage in The Punisher, or will he be too busy in Harlem to see what the Punisher's getting into?

Unfortunately, it doesn't look like Luke will be joining forces with the Punisher, at least not this season. But there will be a familiar face from Luke Cage on the show. Turk Barrett (Rob Morgan), who first appeared on Daredevil, is rumored to be in The Punisher. Reportedly, there's an image from the series in SFX Magazine that shows Frank with a gun pointed at the back of Turk's head. Naturally, Turk doesn't look happy about this meeting, though this tends to be a regular occurrence for the guy.

He's well known for working with a number of New York City's criminals, including Wilson Fisk and Diamondback. In The Defenders, Luke threw him up against a wall to get information about White Hat, a member of the Hand. Basically, Turk is a low level criminal who's a good source of information for NYC's vigilantes, so it's not all that surprising that Frank would go to him for information, especially because Karen has a connection to Turk, since they were both kidnapped by the Hand, and Karen will definitely be in The Punisher.

Besides Turk, there doesn't seem to be any other connection to Luke Cage happening in The Punisher. Even Claire Temple (Rosario Dawson), who's been in every single Marvel Netflix series thus far, won't be making an appearance this time around. Unfortunately, a cameo appearance just wasn't possible so don't expect to see Claire pop up randomly this season. As for whether or not any of the other Defenders will show up, fans will just have to watch and see. It'd be awesome if there was an update on Matt Murdock (Daredevil), since everyone thinks he's dead at this point, but even that seems unlikely.

Although the Defenders may not show up in The Punisher, you can expect a Defenders team up pretty soon, just not in this series. Danny Rand (Iron Fist) will be making his way up to Harlem, and joining Luke in Season 2 of Luke Cage. Of course, Marvel is keeping everything about Iron Fist's role on the show under wraps for now, but it'll be interesting to see these two work together again and without Jessica and Matt. These two definitely got off on the wrong foot and fought each other when they first met.

By the end of The Defenders, they were definitely more like friends but I wouldn't call them BFFs. So why are they teaming up? It could just be that Danny's there to check on Misty Knight, who after losing her arm in The Defenders, gets a new bionic arm from Danny. Or maybe there's a new villain in New York City that needs both Danny and Luke to take care of it. Whatever the reasoning, I already can't wait to see it. Unfortunately, there's no release date yet, although unlike The Punisher, which purposefully kept its release date a secret, it's probably just too early for Luke Cage. But in the meantime, fans should keep an eye out to see if any of their Marvel favorites make a surprise cameo on The Punisher.