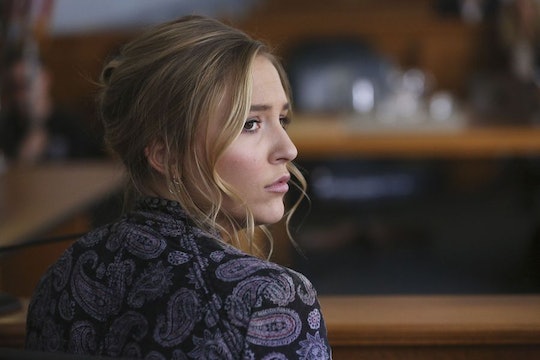 Will Maddie Get Emancipated On 'Nashville'? She's Itching For Independence

On Nashville Season 4, Maddie Claybourne is itching for independence more intensely than we've ever seen before. While she's been struggling with issues of paternity, virginity loss, the dissolution of her first relationship, and other normal teen things all season, Maddie has finally taken her quest for a solo music career to the next level. On the advice of cooler, older, wiser Cash, Maddie went ahead and filed paperwork with the court to be emancipated from her parents. Rayna is trying to reconcile but will Maddie be emancipated on Nashville?

Maddie first becomes inspired to pursue legal emancipation when she learns that her mom hid a huge Sony deal from her — not just a record deal, but a massive new artist launch that would basically turn Maddie into the next Juliette Barnes. Cash is, of course, the sleuth behind this investigation, and she's also pretty much the one at the helm of the whole plan. It almost seems like Cash is angling to ride on Maddie's coattails in some way, perhaps as her manager, producer, or credited songwriting partner.

Maddie's ex-boyfriend Colt also just ran off to join the military after moving in with his grandparents for awhile, so she's been exposed to some other recent role models in the whole taking space from your parents and making massive life choices without them department. She even goes to visit her (legal) dad Teddy in jail. (Since he got served papers along with Rayna for the emancipation hearing, he wanted to hear Maddie's side of the story.)

He doesn't manage to dissuade her, however. Especially not when it comes out that he got her a record deal at Edgehill because Jeff Fordham was blackmailing him using an affair he had with a sex worker. Poor Maddie storms out of the jail cell crying out, "So all of my parents were lying to me?"

It's actually Daphne who seems to get the closest to convincing her sister Maddie to change her mind. She basically incessantly texts Maddie with big sad "Do you want to build a snowman?" eyes, except instead of wanting to build a snowman, Daphne just wants her sister to show up at the benefit they're supposed to perform at together. Maddie eventually shows, and there's a moment where the family thinks they're back together again. But Maddie, talked out of caving into Rayna's preferred outcome by Cash, just sings her song with Daphne and then immediately leaves.

It doesn't exactly seem like Maddie's heart is in it when it comes to giving up her family entirely. But it's also very clear that being able to pursue her music career in a big way, once and for all, and out from under her mother's control, is more important to her than some sappy familial ties. And she has the support network to make it happen, to boot, between Cash, her lawyer, and the multiple record deals she's fielding.