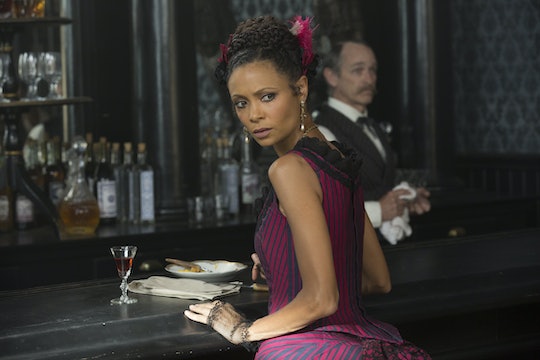 Will Maeve Die On 'Westworld'? She's Playing A Dangerous Game

Westworld has plenty of fully-realized and powerful female characters. Unfortunately, some – like Theresa, and now, apparently, Elsie as well — weren't long for this robot-populated world. It's making me a little bit overprotective of the remaining badass women that are still left — like Maeve, for instance. The clever brothel madam has had one of the most impressive arcs of the first season. But is there a chance that Maeve will die on Westworld Season 1? She's got a plan to escape, but she's playing with fire. But first, let's discuss the implications of what it even means to "die" as a robot on this show. There's still a lot fans don't know about the hosts and how their data is backed up.

So far, viewers have seen several hosts be "decommissioned" in a variety of ways. Peter Abernathy 1.0 and Walter (two of the first hosts to malfunction), were marched into the very creepy (and waterlogged) cold storage facility in a lower level of the Westworld main building in the final moments of the series premiere. However, Abernathy made a reappearance in the most recent episode of the season, when Charlotte chose him to smuggle data (which was previously stored in the woodcutter) out of the park, with Lee Sizemore's help. So decommissioning (what would seem to be "death" for a robot) isn't even necessarily a permanent death.

On the other hand, Clementine 1.0's on-screen "decommissioning" was a bit different from what fans saw of Abernathy's and Walter's. She was effectively given a robot lobotomy by the technicians at the end of "Trompe L'Oeil," much to Maeve's horror. As far as any of us know, Abernathy and Walter didn't get that same sort of decommissioning treatment before they went into storage.

Was whatever done to Clem 1.0 in that lobotomy an effective permanent robot death? That remains to be seen, because no one has caught of glimpse of her since the lobotomy happened. One apparently surefire way to "kill" a robot would be to dump their data, something that Charlotte mentioned was a concern Ford might do if he were fired. According to Charlotte's concerns about Ford — which Theresa echoed to Bernard shortly before he killed her — there was a possibility that he could destroy Westworld's data, taking with it Delos' years of super-secret research. So while I don't know this for certain, it certainly seems like a massive destruction of the data that make up the robots' personalities and core codes would effectively destroy them permanently.

That's certainly a possible outcome for Maeve, who has been making bigger and more drastic moves every week in her plot to escape from the theme park. At the end of Sunday's episode, "Trace Decay," Maeve had convinced Lutz to alter her core code, allowing her to harm (and even kill) humans and to control the other robots around her. Everything seemed set for Maeve's plan to build an army of fellow hosts to assist with her escape, until one of her reveries tipped off the employees that something was off with her.

When Maeve suddenly had a memory of her prior build (when her daughter was killed by the Man in Black in front of her), she lost control and unconsciously cut Clementine 2.0's throat. This clearly erratic action led the quality assurance employees watching to send a team in to retrieve Maeve. Before you knew it, a group of employees in hazmat suits were closing in on Maeve, presumably to remove her and do testing to figure out what caused her to attack the new version of Clementine.

Unfortunately, if that does end up happening, it's all but guaranteed that the workers will discover that Maeve's core code and personality has been tampered with. Viewers have seen the Westworld techs check information like that virtually every time they've performed maintenance on any host, so it's practically a given.

Will the Westworld workers decommission Maeve once they discover what has happened, or will she manage to escape from them? If she is decommissioned, will it be a temporary thing (like Peter Abernathy's) or a more permanent one, like Clementine 1.0's? Viewers will just need to wait for the upcoming episode, "The Well-Tempered Clavier" on Nov. 27, to find out Maeve's fate.