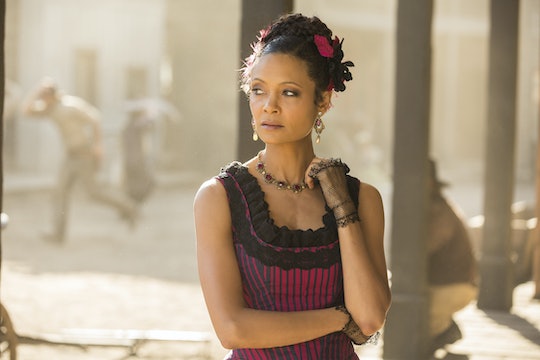 Out of all of the hosts on Westworld, Maeve is making the biggest moves so far. Though Dolores was the first major character who fans saw creeping closer and closer towards self-awareness, it's Maeve who, in recent episodes, has achieved full awareness of her robot state. Not only that, Maeve now has two technicians under her thumb, modifying her to make her even more powerful — and dangerous. But will Maeve escape Westworld? She's getting closer to achieving her goal.

In the latter half of the season, Maeve has been making serious headway in breaking free of her own "little loop." Her journey began when Dolores "unlocked" Maeve's reveries by whispering the apparent trigger phrase that Peter Abernathy had whispered to Dolores herself: "These violent delights have violent ends." Since then, Maeve has been having increasingly clearer flashes of her past "life" as a mother with a young daughter living on a homestead.

In present day, after discovering a bullet fragment left behind inside of her by the clumsy techs, Maeve was able to put two and two together and figure out that something was very, very wrong in her world. She eventually managed to awaken herself while on the technicians' operating table, startling Felix Lutz and forcing him (and eventually the supremely annoying Sylvester) to do her bidding. All in all, it was a pretty badass series of events, easily catapulting Maeve to the status of fan favorite.

Over the past few episodes, Maeve has managed to convince the highly reluctant (and terrified) techs to increase her various characteristics, like intelligence, perception, and self-preservation. But during Sunday night's episode "Trace Decay," she took it a step further by convincing Lutz to modify her core code, enabling her to harm humans and to verbally control other hosts the way only human technicians are typically able to do. These were two important steps in Maeve's ultimate plan: to escape from Westworld. Control over the other hosts, in particular, will allow her to build the army of fellow robots that she needs in order to maneuver a mass breakout from the heavily locked-down Westworld facility.

How behavioral modification noob Lutz managed to make such complicated alterations to Maeve's core code is a little bit iffy, but one thing's for sure — it's made Maeve a force to be reckoned with. She first demonstrated her newfound abilities by violently slicing Sylvester's throat, nearly killing him before commanding a stunned Lutz to save him.

After a delightfully entertaining scene demonstrating Maeve's newfound Jedi mind trick powers on her unwitting fellow hosts during Hector's gang's shootout, the Westworld employees finally realized something was amiss. They sent workers in to retrieve her after Maeve had a jarring memory of the Man in Black killing her daughter and her on their homestead, causing her to unconsciously attack Clementine 2.0. The last fans saw of Maeve, she had pretended to freeze in place, as the workers in hazmat suits came into her room at the brothel to retrieve her.

Things don't look good for Maeve at this point. When she's taken into the lab, the techs there will obviously notice that she's been tampered with. Viewers will just need to wait and see how Maeve manages to think (or fight) her way out of this one, in the final two episodes of the season.