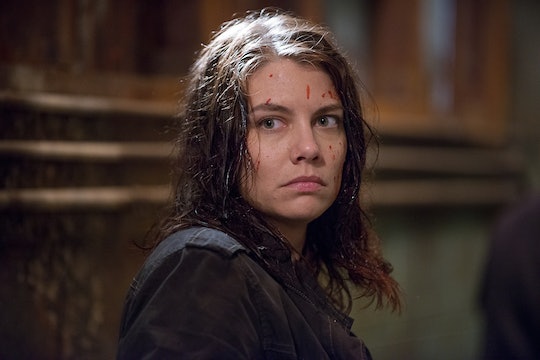 Will Maggie Kill Negan On 'The Walking Dead'? She Deserves Revenge

After the events of the Season 7 premiere of The Walking Dead, almost every character was beaten down by what they had experienced — all but Maggie. Maggie has suffered incredible loss on the show, seeing her home destroyed and her family slaughtered. She lost everyone, but she stayed strong, fighting to build a new life in Alexandria with Glenn and their unborn baby. Then even that was ripped from her when Glenn was murdered right in front of her in the premiere. But unlike everyone else, Maggie was still filled with fire. So will Maggie kill Negan on The Walking Dead?

I think many fans, myself included, are wishing she would. She has more than enough reason to and she's clearly ready to go, even if she can barely stand because of her physical and emotional trauma. In the comics, she is able to utilize her grief and take real power, so it is fair to assume that no matter what happens, Maggie's strength will be undiminished. She doesn't kill Negan in the comics, but that doesn't mean it's not possible in the show. It's not necessarily the most likely outcome, but it would still be an incredibly satisfying turn of events.

In the comics, Maggie chooses to honor Glenn's last wishes instead of living purely for revenge. He had wanted to relocate their family to the Hilltop community, which he considered safer, and Maggie decides to follow through on this after his death. She begins to butt heads with Hilltop's leader, Gregory, and is instrumental in getting Hilltop to join the fight against Negan. She becomes the leader of the Hilltop community, a position she still currently holds in the comics. It's there that she gives birth to her and Glenn's son, Hershel, Jr.

As for the show, it's less clear what Maggie's journey will be. She could be at Hilltop now, where she was initially headed before Negan's attack to seek medical care for complications to her pregnancy. Considering how much she lost, it would make sense for Maggie to focus on the safety of her unborn child instead of immediately running off to attack Negan without a plan. That doesn't mean she won't take a stand against Negan later, but it's highly unlikely she's going to kill him any time soon — and that has as much to do with Negan as it does with Maggie's current situation.

Negan is a character that is clearly beloved by his creators; just look at all the excitement that preceded his introduction. Though defeated, he remains alive in the comics. It stands to reason that he'll be on the show for a while to come, so don't expect Maggie to get bloody vengeance anytime soon. Still, it would be nice to get to see her confront the man who killed her husband. Maggie deserves that much.