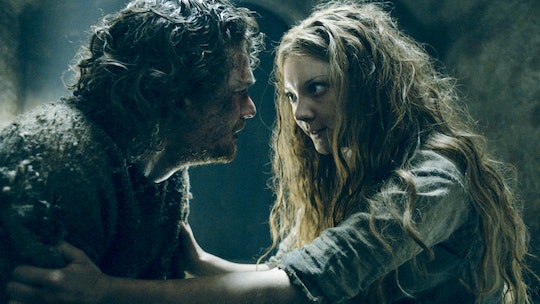 Will Margaery Do A Walk Of Shame On 'Game Of Thrones'? The High Sparrow Seems Intent

Previews for the Season 6 Game of Thrones episode "Blood of My Blood" feature a humbly-clad Margary Tyrell standing before the High Sparrow and all of King's Landing being called a disgrace, which prompts the question will Margaery do a walk of shame on Game of Thrones? The sneak peek suggests that it could go either way.

Margaery is currently imprisoned for lying about her brother's sexuality to protect him from whatever god-awful horrors would befall a outly gay royal in Westeros. According to the High Sparrow, this is a crime of treason on Margaery's part (the same crime Cersei was convicted of and punished for), so she might also have a walk of shame in her future.

In the preview clip, we see Margaery standing in front of the people of King's Landing as the High Sparrow announces, "She disgraced her house, her king," which certainly looks an awful lot like she's about to be publicly humiliated. But the preview also splices in scenes of Jaime and Cersei Lannister plotting an act of revenge against the High Sparrow.

"We should treat them without mercy and we will," Cersei assures. "Show them what we do to our enemies."

Then, we see the High Sparrow interrupted mid-speech, as the Lannister armies march out in front of the crowd in full armor and on horseback, pointing their spears towards the High Sparrow (who is normally surrounded in a protective circle by the rest of his religious order). If Jaime's men intervene right before Margaery has to do her walk of shame, it may explain the not-too-concerned and perhaps even smug expression we see on her face as the High Sparrow is disparaging her to the crowds.

On the other hand, will Cersei really spare Margaery the same shame and anguish she was forced to endure? She isn't a huge fan of her daughter-in-law, especially since she's proving to have her own queenly agenda in mind. Then again, Cersei would do anything to protect her son Tommen, who genuinely does love Margaery and who would surely be disgraced by proxy if his wife was paraded down the streets naked in front of a nun ringing a shame bell.