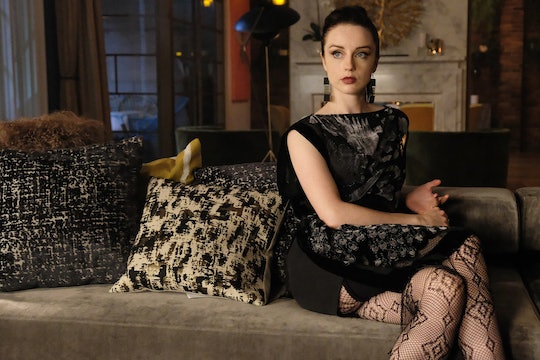 The Identity Enchantment On 'The Magicians' Is No Match For Marina

When Marina located the amnesiac main characters of The Magicians in the Season 4 premiere, it seemed promising. Someone as enterprising as Marina should be able to get them back to their old selves in no time. However, her attempt to see their true identities had everyone dropping into a dead faint. So will Marina reverse Dean Fogg's spell?

The trailer for Episode 2 isn't as revealing as some fans might hope. Marina receives a call from Fogg telling her not to tamper with his enchantment. But let's be real: this is Marina, so being told not to do something is basically just a siren call to do it anyway. There's no doubt in my mind that she'll continue to try to undo the spell, but even if she tries, that doesn't mean she'll succeed.

It seems like the enchantment is just too strong for Marina to break on her own. It was designed that way. If any of the characters even get close to finding out the truth, they almost get pulverized by flying debris. This spell probably won't be undone in Marina's living room without a great deal more effort. She may make an attempt to lift the identity spell, but she might not manage it.

There are a few possibilities that could allow for Marina to do it, however. Mystical objects have popped up throughout the series that allowed a character to accomplished previously impossible feats (like traveling to Fillory just by touching a button). Perhaps Isaac, Sam, DJ Hansel, and Marina could go on a quest together to get something that will undo the spell. Or maybe Marina could rope in some of her hedge witch friends to enhance her power enough to break the enchantment. There's also the chance that Kady, Penny, and Josh could help her do it. They may have forgotten who they are, but they are still magicians at the end of the day.

So far, no one in the cast or crew has shared spoilers about how this particular plot will unravel on the show. The only guarantee is that it can't go on forever. The characters will return to their true selves one way or another, whether it takes a Fillorian intervention or Marina's quick thinking. It's highly unlikely that The Magicians will turn into The Adventures Of Some Normal People, so Quentin and company are going to find out the truth eventually.

And there are so many routes for getting there that all kinds of theories are plausible. Marina is the best bet for lifting Dean Fogg's spell at the moment simply because she's in contact with most of the main characters. But who knows what could happen? Maybe Dean Fogg will end up feeling too much guilt over working with the library and decide to undo the spell himself.

There are a couple of characters with enough power to handle this kind of spellwork solo, so let's not count out other options. Though Julia doesn't know who she is, she's still a force to be reckoned with. If she uncovers her own identity soon, she can do the same for everyone else. And Alice is on her way to becoming a master magician, so if she ever gets out of jail, she's could help out, too.

But I wouldn't dismiss Marina just yet. When she sets her mind to something, she can usually find a way to make it happen.