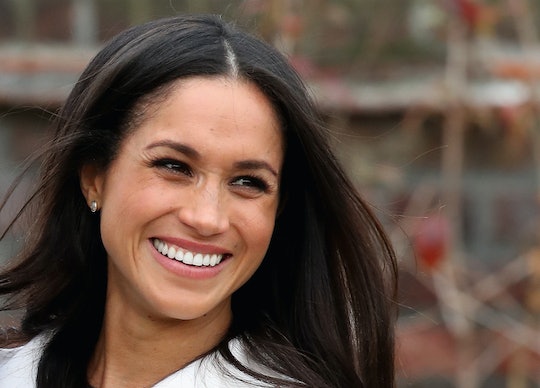 Though she's now well-known for becoming the fiancée of Prince Harry and soon-to-be rumored Duchess of Sussex, Meghan Markle rose to fame for her humanitarian work and her role as Rachel Zane in the popular legal drama Suits. But now, Markle is trading the life of a Hollywood actor for that of a "princess." While that seems like a more than ideal situation for a lot of people, just as many people are going to miss seeing Markle on their TV screens. Now, many are wondering if Meghan Markle will still be allowed to work once she is married to Prince Harry.

After announcing their engagement on Monday, Markle and Prince Harry sat down for an interview with the BBC and revealed all of the very exciting details about their relationship, their engagement, and everything in between, including Markle's career. During the interview, Markle admitted that she would be transitioning "out of her career" and into a "new role" focusing on philanthropy full time. Markle said, according to TIME:

... The causes that have been very important to me, I can focus even more energy on because very early out of the gate you realize that once you have an access or a voice that people are willing to listen to with that comes a lot of responsibility, which I take very seriously.

Markle then said that she wasn't "giving up her career" but that she instead see's the move as a "change" and a chance to "work as a team" with her soon-to-be husband. Markle even joked that her and Prince Harry's desire to see change in the world is what likely led to their second date.

But while Markle had a positive outlook on this career change, others weren't so happy about it, taking to Twitter to express their concern about her giving up her career.

While Markle might not be on the big screen anymore, devoting her life to charity work isn't something out of the ordinary. As a student at Northwestern University in Chicago, according to Town & Country, Markle double majored in theater and international relations. While her life took her down the path of one major, her fiancé will take her in the path of another. And according to Fox News, the decision to give up acting was likely a decision made together by Markle and Prince Harry, not one made by the royal family or her future in-laws.

Like her soon-to-be sister-in-law, the Duchess of Cambridge (or Kate Middleton, as most people know her), Markle will likely spend her time making official appearances and doing humanitarian work, according to Cosmopolitan. Middleton's role as Duchess of Cambridge is to accompany her husband, Prince William, on royal duties and to undertake official duties, like making more than 2,000 official engagements a year, in addition to supporting charities and organizations.

Markle's exit from acting shouldn't come as a surprise. This past spring, Markle shut down her lifestyle blog, The Tig, with little explanation, after running it for three years. According to E! News, Markle said The Tig was "never her future," and she reportedly wanted to focus on "other worldly endeavors," like philanthropy. And Suits show runner, Aaron Korsh, recently said that he "took a gamble" on Markle's relationship with Prince Harry and decided to write her out of the show a year ago in anticipation for the engagement, according to the BBC.

Before she met Prince Harry, Markle was already a humanitarian, in addition to an actress. She worked closely with the United Nations and other philanthropic organizations. At the U.N., Markle served as an Advocate for Political Participation and Leadership — a role that she will have to give up in exchange for causes that are just as important, according to Forbes. But while her new role might be relevant to her interests, according to writer Jill Filipovic, Markle will be very dependent on her fiancé and his family.

Clearly, being a Duchess is a full-time job in itself, but it seems as if Markle is more than ready — and maybe even a bit overqualified — for her new role.