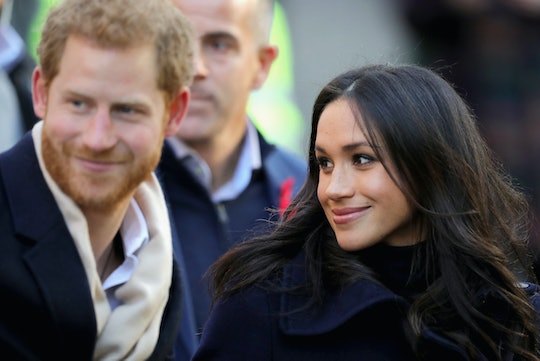 With the arrival of Baby Sussex right around the corner, the world is getting increasingly excited for the family's life as a trio. However, with a new baby means the royals will have to prepare to balance parenthood and the tasks and duties that come with being the Duke and Duchess of Sussex as well. And this means that they, like many parents, will probably need help, so will Meghan Markle and Prince Harry hire a nanny? Well, it sounds like they have a plan for their royal care-taking needs.

If they do indeed employ a nanny, they wouldn't be the first royals to do so. Markle's sister-in-law Kate Middleton has used a nanny since her first child's birth, according to The Sun, which is understandable given not only their fiscal position, but also their extraordinary work responsibilities. Be that as it is, Markle has been known to break royal protocol, so just because the Cambridges did something doesn't mean Markle will, too.

Previously, Town & Country reported that Markle is looking forward to enlisting the help of her mother, Doria Ragland, after she gives birth. However, Vanity Fair reported that long-term, Markle is not only looking for a nanny, but she wants one who is American. This could be because of her own heritage, or to at least have a touch of American culture in her home, which is otherwise completely British now.

Regarding the job hunt, The Mirror reported that Markle and Prince Harry have already started their search, and are also considering hiring a male nanny. "They are keen to explore the ­possibility of a male nanny. The worker will earn up to £70,000 a year, depending on ­experience," a source reportedly shared with The Mirror. "Meghan was clear in telling recruiters she favors an American over a Brit and wants them to feel part of the family rather than a uniformed member of staff."

The source also told The Mirror that though she does reportedly prefer an American nanny, bilingual ones are also preferred, no matter where they come from. "That is important to her, she's never hidden the fact she is fiercely proud of her American roots..." the source told the publication.

Though awaiting the arrival of the baby is undoubtedly an exciting time, Vanity Fair reported that the Duke and Duchess are already looking ahead to the fall, for when Markle will return to work in the commonwealth.

According to Vanity Fair, a source shared that one of their first engagements together will be in October, when they attend the One Young World summit, which is a global forum supporting 10,000 young leaders internationally. "Harry is keen to support Meghan in developing her own role and the opportunity to partner with a cause so close to her heart is an ideal stepping stone. All being well with the baby, the timing is perfect for her to expand her Commonwealth work through this new One Young World partnership with the Queen’s Commonwealth Trust,” the source said, according to Harper's Bazaar.

Right now, though, the focus is on a healthy and safe delivery for the Duchess of Sussex and her firstborn. Though it's speculated that Markle is due any day now, given in no small part that she went on maternity leave roughly a month ago, which is protocol, her exact due date is not known. In the meantime, the world is looking forward to the couple sharing their first photo of their son or daughter.

And until that happy day comes, it's already very clear that the Sussexes are going to be incredible parents, and that they'll undoubtedly find all the help they need along the way.