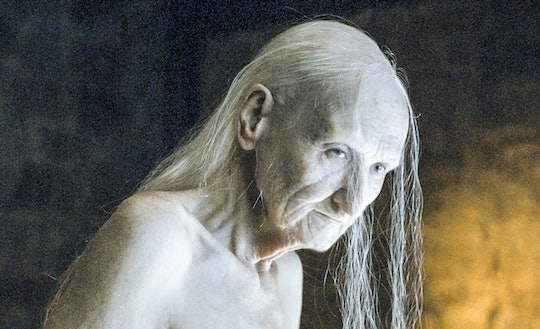 Will Melisandre Die Without The Necklace On 'Game Of Thrones'? She May Take On A New Form

While most of the Season 6 premiere of Game of Thrones was dedicated to setting the scene in several kingdoms of Westeros, viewers were treated to one juicy bombshell: the revelation that Melisandre, The Red Woman and priestess of the Lord of Light, is actually a very old woman, "glamoring" her appearance to make her look young and beautiful and ginger. We learn this when she takes off the ruby necklace she wears, which glows red when she performs magic. Presumably, it is the source of her power. But will Melisandre die without the necklace on Game of Thrones?

It's not totally clear how she gained this particular iteration of immortality, but we do know from the books that The Red Woman gave up a lot in pursuit of it. "They need never know how difficult it had been, or how much it had cost her," one passage of the books reads, according to Vox, with regard to how she gained the capacity for glamor magic. The books also include an explanation from Melisandre about the importance of having a talisman-like object in the glamoring process. She says:

"The strongest glamors are built of such things. A dead man's boots, a hank of hair, a bag of fingerbones. With whispered words and prayer, a man's shadow can be drawn forth from such and draped about another like a cloak. The wearer's essence does not change, only his seeming."

If we take this passage and apply it to what we've seen in the HBO series, then perhaps Melisandre's necklace actually belongs to a dead woman whose visage she stole to appear young and beautiful. Maybe she had to do something horrible to the woman to gain the power of glamor magic, or to gain her unusually long lifespan.

It's possible, then, that the necklace doesn't actually have anything to do with Melisandre's immortality or magical ability; it's simply the source of her youthful appearance. It's also worth noting that we don't actually know if Melisandre is immortal; we only know that she's survived a poisoning and is several centuries old. There is possibly still some circumstance that might result in her demise.

But since Melisandre successfully escaped the slaughter of Stannis's armies and made it to Castle Black, where her magical prowess sure would be of assistance in the case of one very dead Jon Snow, it's probably safe to assume that she's too valuable a plot device to kick the bucket any time soon.