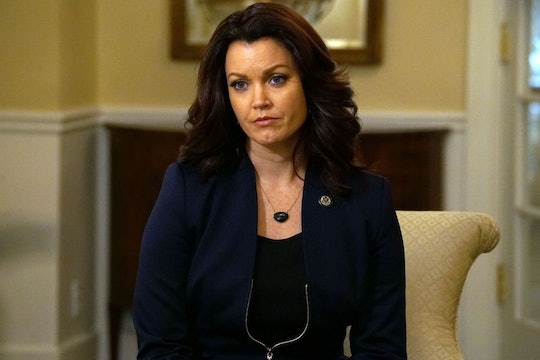 Mellie Deserves A Win On 'Scandal'

One of the cleverer and more surprising plot twists on Scandal was the Season 5 decision to make Olivia Pope Mellie Grant's presidential campaign manager. Even better: it was Mellie who fervently lobbied her husband's former mistress to take her on as a client. She started out Season 5 as a lowly first-lady-turned-junior-senator from Virginia, but by the end of the season, she was walking out on stage at the Republican National Convention with her ex-husband, the President, by her side endorsing her and Jake Ballard as her running mate. So will Mellie Grant win the election on Scandal? She survived the brutal primary season, which is a good sign.

Mellie's primary race pitted her against uber-earnest Vice President Susan Ross and Trump-esque oil tycoon Hollis Doyle. Meanwhile, on the democratic ticket, Olivia's ex Edison Davis was running as Rowan's puppet, with Jake originally slotted to be his VP pick. Olivia upended that plan by poaching Jake for Mellie's ticket (at gunpoint, no less), but it didn't matter for Edison. Democratic Governor of Pennsylvania Francisco Vargas won the nomination with Cyrus Beene as his campaign manager-turned-running mate. (Cy cleverly pitched David Rosen as a VP suggestion, but it was a ruse to mask his plot to get himself back in the White House.)

This leaves reputation-damaged, shrewd, eager, bossy, know-it-all Mellie up against a likable, charismatic, Hispanic, young male Democrat. Sound familiar? (Thankfully, Hollis Doyle didn't get very far in the race, otherwise it would be a little too familiar.) There's a reason Scandal stalled for a midseason premiere this year: the real-life 2016 election parallels are unnerving. Mellie does have a few aces up her sleeve, however, like the fact that the greatest spin doctor on earth Olivia Pope is running her campaign. Plus, she has the endorsement of her well-liked ex-husband/current POTUS, thanks to a genius divorce settlement stipulation. And she has an extremely handsome and palatable VP pick, in addition to appealing to a female voter bloc. Not to mention, Mellie has a much stronger national profile than relative newcomer Vargas, as a former first lady.

But Vargas has much less baggage than Mellie and he appeals to the all-important Hispanic voting bloc. He's basically a Democrat version of Fitz, but with more street cred and less polish. Plot-wise, writers could squeeze a little more juice out of handing Vargas the election, putting the scheming Cyrus Beene back in the West Wing, and torturing Mellie with further punishment simply for being an ambitious female candidate. She's worked unbelievably hard to get this far, but, just like in real life, that kind of work ethic typically backfires for a woman. We'll have to see just how devastating a gut punch Scandal throws at us to kick off this season, but we do know that the premiere opens on election night results, so luckily, we won't have to wait too long.