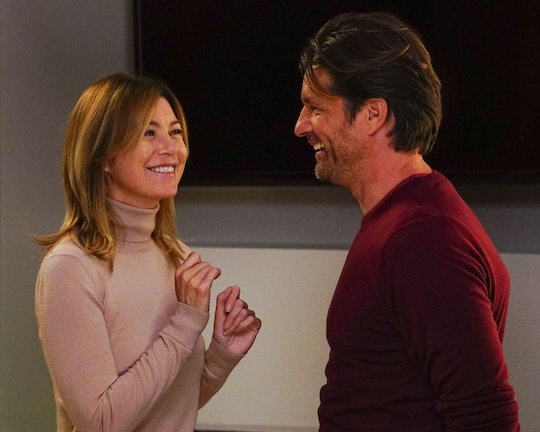 Will Meredith & Riggs End Up Together On 'Grey's Anatomy'? Don't Give Up On Them Just Yet

Season 13 of Grey's Anatomy is finally here and we're starting the season off with a love triangle. At the end of Season 12 Meredith began to get back into the swings of her love and life and hooked up with Riggs. During the Season 12 finale it seemed that Meredith was actually starting to fall for Riggs, and not just because he was good in bed (or in a car). Unfortunately for Meredith her sister, Maggie, revealed that she also has feelings for Riggs. So will Meredith and Riggs end up together on Grey's Anatomy or will Maggie's feelings get in the way?

For now Meredith is choosing to put Maggie's feelings ahead of her own, although she's not exactly handling it the best way. After Meredith covered for Alex after he beat up DeLuca, Maggie was heartbroken that Meredith lied to her and made Meredith promise never to do that again. However, Meredith still hasn't told Maggie that she and Riggs hooked up and then when Riggs showed up at the house after Meredith and Maggie's conversation, Meredith told Riggs that she didn't have feelings for him and then told Maggie that it was just someone asking for directions at the door.

It's obvious Meredith is just pushing her feelings aside for Maggie's sake, and Riggs is not going to give up on Meredith that easily. For now Riggs doesn't seem to have any interest in Maggie and only has eyes for Meredith. He doesn't even know Maggie is interested in him at all and once he finds out that may not change anything at all. Either he likes Maggie or he doesn't and he obviously doesn't.

Although Meredith will do everything in her power to pretend she doesn't have feelings for Riggs nothing stays a secret in Grey Sloan hospital and once Maggie finds out the truth about what happened between Meredith and Riggs she'll be furious. Most likely Maggie will move out of the house and she and Meredith will have a falling out that will allow Meredith to just go for it with Riggs, because at that point she'll have nothing to lose.

Whether Meredith wants to admit it or not, besides that other doctor from that no name hospital she hooked up with for two episodes, Riggs is the first person to make her feel something since Derek (RIP). There's no way this connection she has with Riggs is going to end this easily. These two will definitely end up together. Now whether or not that relationship lasts is a complete different story.