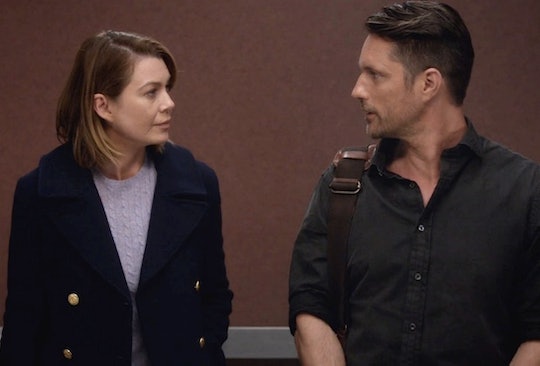 Meredith's Feelings For Riggs Are Complicated

While many Grey's Anatomy fans will never get over the tragic end of MerDer (RIP Derek), others are ready for Meredith to find love again. At the end of Season 12, it looked like Meredith was ready to try to have a real relationship with Riggs, but that plan got derailed when Maggie revealed she had a crush on Riggs. After that, Riggs let Maggie down gently and since then their love triangle has been put on the back burner of the show, until now. So will Meredith and Riggs start dating on Grey's Anatomy? It definitely appears that way.

Meredith has handled the Riggs situation pretty strangely thus far. After they hooked up she pushed him away, telling him she didn't want a relationship and indicated it was just a hook up. However, once Maggie confessed she had a crush on Riggs, instead of telling Maggie that she'd already slept with him and had feelings for him too, she had Riggs let Maggie down gently. Then once Maggie was out of the picture, Meredith still resisted Riggs and even picked a fight with him, accusing him of playing favorites with her at one point.

Still, it's clear these two have a lot in common. They've both lost people they loved and at the end of the latest episode it became clear that Meredith understands Riggs better than Maggie does. In the preview for Thursday's episode, Meredith finally returns to work and it looks like Riggs is back to pursuing her again, but Meredith continues to resist, denying she even has feelings for him and it's unclear why.

Is it because she's still worried about Maggie's feelings? If that's the case, she should just tell Maggie the truth. She may be mad, but it'd be better if Maggie heard it from Meredith than if she found out some other way. Or is Meredith still not totally ready to move on from Derek? The last time she let someone sleep over at the house, she ended up freaking out and hasn't had a guy over since. Maybe she's still not ready.

Whatever the reasoning, I just hope Meredith's happy. If being single is what works for her then that's great, but if she's running from Riggs because she's scared, I hope she's able to move past this and find love again. She deserves it after everything she's been through.

Grey's Anatomy airs on Thursdays at 8 p.m. ET on ABC.