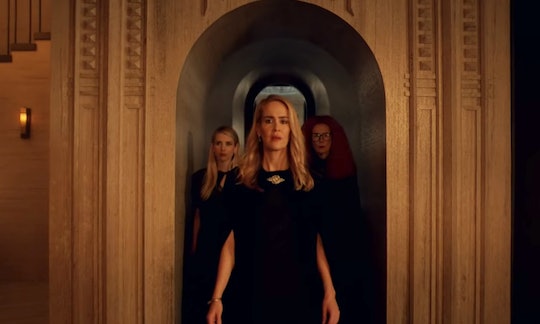 Michael Langdon & Cordelia Might Have To Battle It Out On 'AHS: Apocalypse'

As the Supreme witch of her generation, Cordelia Goode was the most powerful person in the world of American Horror Story, at least until Michael Langdon got old enough to tap into his Satanic powers. Season 8 seems to be building towards a showdown between the two, but who will come out victorious? Will Michael Langdon kill Cordelia Goode on AHS: Apocalypse?

It's impossible to predict what will happen later in the season, but Michael does have the power to take Cordelia out if he chooses. Though she is a formidable opponent, Episode 4 saw Cordelia's abilities reach their limit. She could not overcome the Satanic energy of the Hotel Cortez to rescue Queenie's soul from within its walls, nor could she pluck Madison from her own personal hell. Michael was able to accomplish both feats with ease, which shocked Cordelia so fiercely that she fainted.

However, killing Cordelia didn't seem to be high on Michael's priority list. Though there was a sense of competition between them, it doesn't look like he tried to take her out before the apocalypse began. Demonstrating his magical strengths by going after Queenie and Madison was just a way for Michael to make a point: to prove that he was on Cordelia's level, and might even surpass her as Supreme. It seems like he is powerful enough to kill her, but it's less clear whether or not he will. And even if Michael does kill Cordelia, there's no guarantee that she'd stay dead.

Michael is a threat unlike any other. The warlocks of the Hawthorne School for Exceptional Young Men believed him to be the Alpha, a warlock powerful enough to complete the test of the Seven Wonders and supplant the Supreme. The magic Michael demonstrated in front of them wasn't like anything the warlocks had ever seen before, but that could be because Michael's powers have an ominous source. Way back in Season 1 before he was born, medium Billie Dean Howard predicted that he would be the Antichrist and bring about the end of days. Whether he's the Antichrist or the Alpha, Michael is certainly strong enough to put Cordelia in danger.

Some Reddit users have even begun to speculate about her death, though they're not happy about the possibility. User The_188 wrote, "I hate that I have a feeling Cordelia will have to sacrifice herself to save the world." That would open the door for the next Supreme to rise (maybe Mallory, considering how unusual her powers are) and take out Michael once and for all.

But Redditor wonderb***h26 envisioned another alternative that saw Cordelia triumphing over her potential demise:

My hopes: Michael succeeds in killing Cordelia and the Coven, revels in his victory, gets cocky, gloats. And the boom, Cordelia rises from the dead and witch slaps that b***h back to hell. Brings the other witches and those lost back to life and basically establishes the coven as the new rulers of the world, ushering the world into a new era of peace and prosperity.

There might be a fight brewing between Michael and Cordelia, but neither character will be easy to defeat. Death isn't the end on American Horror Story, making the answer to this question a difficult one to predict.