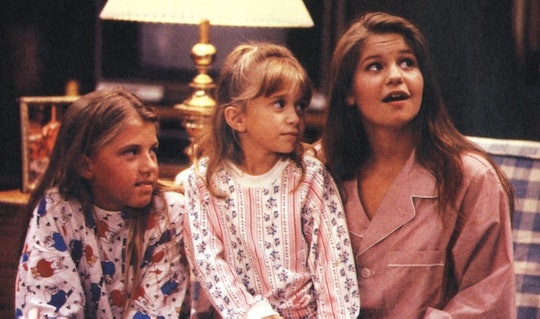 Ever since the Netflix reboot of Full House, dubbed Fuller House, was announced, fans' primary concern was ensuring that all of their beloved favorites would be involved in the updated sitcom. Unfortunately, it became pretty clear early on that Mary-Kate and Ashley Olsen, twins who originated the role of Michelle Tanner when they were just a year old, weren't interested in getting back in front of the camera. They skipped Seasons 1 and 2, despite pleas from fans and production, but will Michelle be in Fuller House Season 3? The first half of the season is set to drop on Netflix later this month and I'm pretty confident DJ and Steph's sister will be MIA once more.

It's been a running joke on the reboot that Michelle has been off in New York working on her fashion empire, in a cheeky nod to the real reason behind the Olsen twins' absence from the show. The show loves its meta gags and Season 2's Thanksgiving episode even featured Uncle Jesse mugging to the camera, "Come, it'll be fun," when D.J. says that she hopes Michelle will join them next year. But the Olsen twins have remained stalwart in their decision not to do the show and honestly, at this point, production's merciless mocking of them is beginning to seem cruel and harassing. The Olsen twins have a very clearly stated a good reason for not doing the show: they just don't identify as actors anymore.

"Ashley said, 'I have not been in front of a camera since I was 17, and I don’t feel comfortable acting,'" Fuller House executive producer Bob Boyett told People. "Mary-Kate said, 'It would have to be me because Ash doesn’t want to do it. But the timing is so bad for us.'"

The Olsens were babies when they started doing Full House and they happened to be able to use its success to launch a production empire. But they stopped acting in their teens and pivoted to fashion, where they've been hugely successful, critically acclaimed, and well-respected. Mary-Kate stretched her acting career a bit longer into her early 20s with an eight-episode guest arc on Weeds and indie film The Wackness. But the tone of both of those projects was super subtle. It's pretty different from the slapstick, cheeseball, live audience vibe of sitcom and the Olsens are well within their rights to say they just don't feel comfortable doing something like that anymore.

Frankly, it seems like they have the show's best interests at heart, which is pretty generous of them, considering they're constantly the butt of its breaking-the-fourth-wall jokes. It sounds like they really believe the show is better off without some rusty, reluctant child actors rattling around on set, and ideally, production makes the decision to respect that in the writing this season.