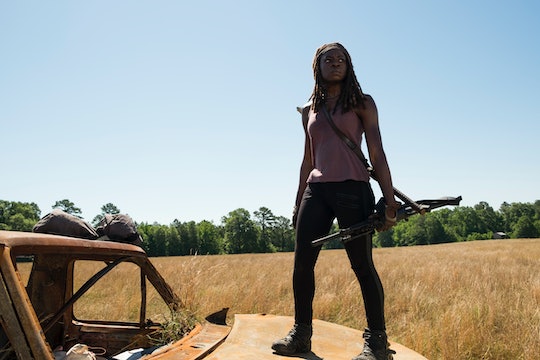 Will Michonne Kill Negan On 'The Walking Dead'? She Has A Plan

It seems like there are fissures forming on The Walking Dead as the residents of Alexandria start to take different sides when it comes to how to deal with the ongoing Negan problem. While Rick is apparently too beaten down to do anything but comply, the same can't be said for the other characters. Michonne in particular isn't someone who has ever been able to let injustice go by unpunished and she's been taking slow but unmistakable steps to handle Negan on her own. At the end of "Sing Me a Song," it looked like she was heading to the Sanctuary to do just that. But will Michonne kill Negan on The Walking Dead?

To be blunt: no. Michonne is not going to kill Negan. No one is going to kill Negan. Negan isn't going anywhere for a long, long time, evidenced by the fact that Jeffrey Dean Morgan is already signed up for Season 8. But that doesn't mean Michonne isn't going to try. She may not succeed, but it's clear Michonne has some kind of plan in place. It began with her sniper practice in "Service"; while Michonne has always been a pro with her katana, she may not get close enough to Negan to use it on him because of his huge army, making sniping skills a necessity. But when all the guns were taken from Alexandria, Michonne was forced to come up with a new plan, one that she put into motion in "Sing Me a Song."

At the end of the episode, Michonne stopped a Savior truck and attacked the driver, demanding to be taken to Negan. It's unfortunate that Michonne's timing means she'll just miss him; as she was catching a ride to Negan's fortress, he was rolling into Alexandria and right into Michonne's house. Michonne may be robbed of her opportunity to kill Negan because of something as simple as being in the wrong place at the wrong time. There's also the added danger of her heading right into a nest of vipers; she won't get to take out Negan and she may end up another hostage of the Saviors.

But that's not the only possibility. Michonne could be the one to liberate Daryl from his cell even if she doesn't get to kill the man in charge quite yet. And Michonne may not even get escorted to the Sanctuary; she could end up at one of the outposts instead. Michonne's storyline in the comics followed a very different path, so there isn't much to go on when it comes to predicting what will happen to her on the show.

Even though Michonne may not get the chance to kill Negan any time soon, she's not the type to forget a grudge. Negan should start sleeping with one eye open.