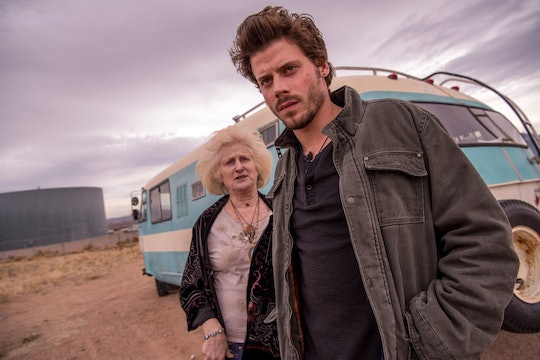 'Midnight, Texas' May Not Live To See Another Day

If it is not a rule already, I truly believe it should be: There must be at least one TV show constantly airing about a small town filled with supernatural people and creatures. This summer, NBC's Midnight, Texas filled that void. But will it continue? Will Midnight, Texas return for Season 2? As of right now, it's really unclear.

The show is about a young psychic named Manfred, played by François Arnaud, who moves to the small town of Midnight in Texas (hence the name) on the advice of his dead grandmother, who tells him he'll be safe there. (And when your grandmother tells you to do something, you do it regardless of whether she's dead or alive.)

Instead of your average, run-of-the-mill small town, Manfred finds himself in a town full of magical people. There's a vampire, a witch, and someone with elaborate feathered wings who "watches over us all." The town is said to be set on the veil between the living and the dead, not unlike Sunnydale from Buffy the Vampire Slayer or Mystic Falls from The Vampire Diaries, which incidentally are both shows that I absolutely adore. Furthermore, the series is based on books written by Charlaine Harris, who you may recognize as the author behind the books that inspired True Blood and the town of Bon Temps, Louisiana. Basically, it has everything I'd ever want in a show.

The real question, now, however, is whether it will make it to a second season. In the interest of full disclosure — I have not watched the show. I know, I know, I just went on and on about how much I love this kind of stuff. But the sad fact is that I simply had never heard of it until now. And that little bit of anecdotal evidence may not bode well for this series' future. As anyone who was a fan of Firefly knows all to well, a show's survival is based on ratings and how many eyeballs it can attract rather than actual merit. This is why terrible shows (I'm not going to name names) can last for several seasons, while deserving outcasts (remember Pushing Daisies?!) don't make it very long.

Generally, summer network shows can expect lower ratings than their fall and winter counterparts. Sometimes, as with movies, a show that's not predicted to do well will be pushed to the summer, as Midnight, Texas was. However, don't count this series out just yet. It showed pretty promising ratings during its run, premiering with 3.6 million viewers, about on par with other shows airing in the same slot that have been renewed. Its finale drew 3.4 million viewers, just about tying its premiere, which is definitely a good sign for the show. But will a 0.9 rating be enough to ensure its future?

Unfortunately, the show has not been getting spectacular reviews. Variety said "Viewers casting about for something with vampires, werewolves and spellcasting should set their expectations low — perhaps under the floorboards," while a review from The Hollywood Reporter said "I just don't see the pieces in place at the center of the cast or in the creative aspirations for Midnight, Texas to be anything more than a PG-rated version of what ought to be a decadent and overblown summer guilty pleasure."

If you think that all of this censure is totally unwarranted and you love Midnight, Texas, then the best course of action for you would be to get thee to the internet. If fans really want to save the show, then they'll have to be extremely vocal about getting it renewed. If not, it's possible that this supernatural town is doomed to a one-season run.