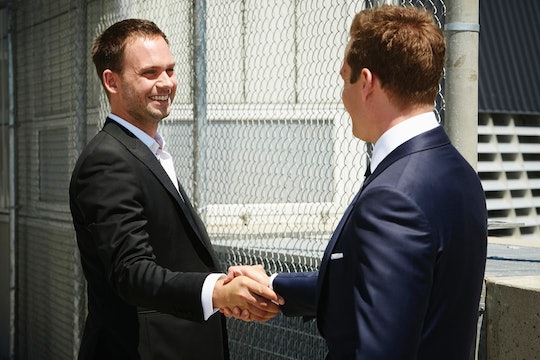 Mike's Law Practicing Days May Be Over On 'Suits'

Suits is finally back and with a new season comes new problems. Although Mike is now out of prison, he's still a convicted felon, which makes it difficult for him to get a job, especially in the law. Harvey, who's still struggling with the fact that Jessica has left, offers Mike a job as a consultant at Pearson Specter Litt, but Mike doesn't want to take it. Instead he goes out to law clinics to see if he can secure himself a new job, but of course his plans are thwarted. So will Mike ever practice law again on Suits? Well, not if Anita Gibbs can help it.

Mike knew it'd be a long shot to get hired with a felony conviction, but he was hoping there was still a chance. However, after applying for jobs at various law clinics around the city, he was beginning to lose hope and just like any devout Catholic, when he began to lose faith, he headed back to church. There he talked to Father Walker about how he was struggling to find work (even though it hadn't even been a day yet) and the priest offered Mike a teaching position at his old high school. Though hesitant at first, Mike decided to take the position.

The job didn't start out so great when the students revealed they knew all about Mike's criminal past, but Mike was able to find common ground with them by discussing a beloved teacher they all knew who was dying of cancer. Unfortunately for Mike, one of the students told their parents about his time in prison and Father Walker had to let him go. To make matters worse, Harvey's attempt to get Anita Gibbs to testify for Mike's character and fitness for the BAR only angered her. In retaliation, she went to Mike and warned him that if he continued to try to get a job at a law clinic or practice law in any way, she'd be right there to stop him. Yikes!

Naturally, Mike didn't take this news well and ended up having a fight with Harvey, which was heartbreaking to watch, since Harvey was already having a tough day. Mike promised he'd never come back to work at Pearson Specter Litt (yeah, OK) and then stormed out. If Mike doesn't end up working for Harvey again I'll be shocked. Honestly, where else will he find work if not with Harvey? The truth is he is a convicted felon and unless some kind of TV miracle happens, he'll never be able to practice law again. At least not without some serious help.