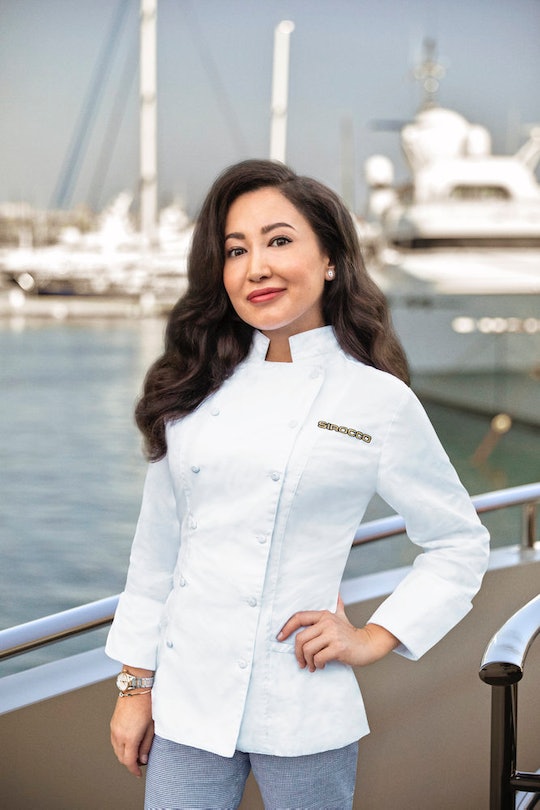 Below Deck Mediterranean sailed into Season 4 with the franchise's first ever female chef on board. But sadly, Chef Mila Kolomeitseva left a lot to be desired when it came to Captain Sandy Yawn's standards — and most other people's standards, too. Rumors around whether Mila will get fired on Below Deck Mediterranean have swirled since before the season began, and there have even been a few theories as to who might replace her if she does get axed. But as of right now, she's still gainfully employed aboard the Sirocco.

In the Jun. 24 episode, according to a preview clip obtained by People, Mila struggles with yet another basic cooking task: making pancakes at the request of some diners aboard. Although she trained at Le Cordon Bleu, Mila can't seem to get her pancake batter to thicken up, resulting in thin, floppy, sad-looking pancakes, rather than the hot stack of thick, fluffy pancakes her guests (and fellow crew members) are expecting. In the clip, she reveals she's using boxed pancake mix, which brings another wave of derision from her fellow crew members.

"I used special pancake batter, okay?" she defensively points out. "So that you don’t tell me I can’t f*cking bake, I use this American — what everybody f*cking uses."

Mila seems to think the primary complaint about her food is that it's not accessible enough, and so she uses an American boxed pancake mix. But the problem isn't that her food isn't what people are used to; it's just that it's not up to par. Earlier in the season, she made some truly unappetizing nachos and tacos (also using pre-made components) on what she deemed "Mexican night," which also went over poorly. And who could forget that she spent her very first episode of the season with food poisoning after licking a raw steak before putting it in the microwave? Needless to say, Mila seems in over her head skills-wise and it's only a matter of time before the quality of her work becomes a far bigger issue.

Unfortunately, she isn't making things any easier on herself by alienating the other crew members. In the Jun. 10 episode, she let loose some homophobic comments on her first night out with the crew.

"I don't want to see a man kissing a man in front of me," she said after making an assumption that deckhand Travis Michalzik was gay based on his nose piercing. She added, "In your home, you guys can do whatever you want. I don't want my son to be growing up and seeing two men kissing each other and thinking this is normal because this is not f*cking normal!"

That is obviously a lot to unpack, and in the moment, Travis lost his cool and blew up at her, requesting that she stay away from him for the rest of the season. But later, on the Below Deck Mediterranean Season 4 After Show, Travis admitted that he felt embarrassed about getting angry and wished that he had turned the conversation into a teachable moment instead. He clarified that although he now identifies as straight, he had experimented with his sexuality in the past, so the comments struck a chord.

Ultimately, Chef Mila might be an all-around bad culture fit for the Sirocco, and it doesn't seem like her actual culinary skills can save her.