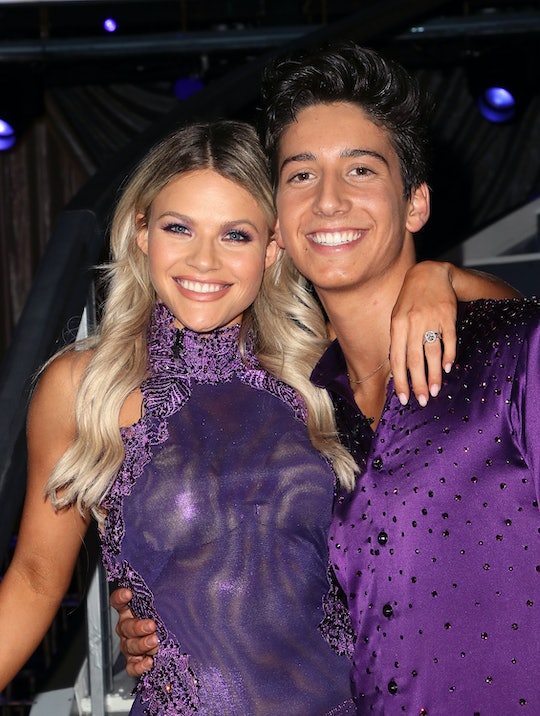 Milo Manheim and his Dancing with the Stars partner, Whitney Carson, are on a winning streak. On Halloween, the duo earned a perfect score of 30 for their creepy rendition of 2WEI's Toxic, and fans can't get enough of their fun dynamic. So, will Milo Manheim win 'DWTS'? Given Manheim's success this season, it's definitely possible.

In case you missed it, Carson and Manheim's performance of Toxic was pretty spooktacular. The show starts off with a zombie version of Manheim alone in a padded room, looking creepy as all get out. An equally as scary Carson then appears, which kicks off their eerie and electric dance routine.

"THIS WAS PERFECTION! This dance is by far my favorite!" one person commented on a video of the performance. "I had chills the whole way through and Milo played the part well! Team Witlo for the mirrorball!"

"This dance will go down as one of the best contemporary dances on the show﻿," someone else chimed in.

Another fan added: "What a phenomenal performance!! Milo just keeps getting better and better!!!!!!

Longtime fans of Manheim, however, probably aren't surprised by all of this praise because Manheim perfected his dance skills during the filming of Disney's TV musical, Zombies.

He explained in an interview with Hello Giggles:

Prior to Zombies, I had no formal dance training. I performed in over 20 musicals and learned a few dance moves from different directors and choreographers. As for the hardest dance to learn in Zombies, it was definitely “BAMM,” because it took me the most time to perfect. It was hard to sing the intricate lyrics and do all the stylized dance moves simultaneously.

It looks like Manheim's hard work paid off because he's one of the frontrunners to win DWTS Season 27. Want some proof? Manheim has the second highest average score this season, a fortuitous sign that he'll walk away with the iconic mirrorball trophy this year.

If 17-year-old Manheim does win, he'd become the youngest winner of DWTS ever. Talk about an impressive accomplishment.

It's clear fans are hopeful Manheim will walk away with the coveted title.

One fan wrote on Twitter: "@MiloManheim better win dancing with the stars. He’s the Best dancer I’ve ever seen on this show. @DancingABC."

"Anyways if Milo Manheim doesn’t win dancing with the stars this season I will riot," another person added.

Someone else chimed in: "@MiloManheim better win Dancing With the Stars because he’s the best that’s ever been on there. Boom.

Week 9 of the show, aka the finale, will air on Monday, Nov. 19. Manheim first has to make it through the competitive semi-finals before he moves on to the finale episode, a likely scenario given his impressive stats.

But if you were to ask Manheim what he thinks about winning this season, he'd probably wouldn't brag about his good chances. Instead, he'd likely gush about his beloved dance partner, Carson. He said in a glowing Instagram post on Oct. 17:

Wittles. I know I’ve only known you for less than two months but you truly feel like a (little) big sister to me. Being in this show can be really hard sometimes but it’s easy to get through it knowing I get to see you everyday. You make me laugh more than anyone I know. I cant wait to be friends with you for a lifetime💕 I love you more than you love Matcha Tea.

Aww. It just goes to show that winning might not be at the forefront of Manheim's mind, even though fans are rooting for his victory. Either way, it's clear Manheim's star will continue to rise long after his stint on DWTS.