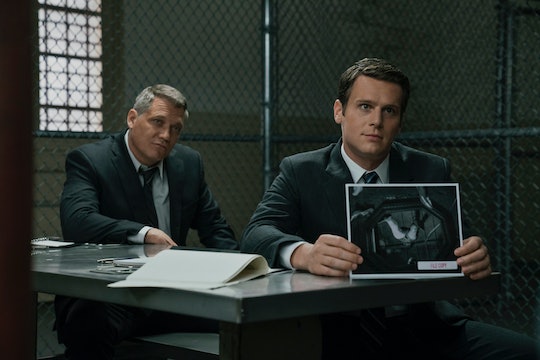 'Mindhunter' Season 1 Ended On A Cliffhanger

If you've spent the past ten hours binging Netflix's new crime drama Mindhunter the way I have, then you're probably huddled in front of your computer right now falling down the rabbit hole of serial killer Google searches, and wondering about Season 2. You might also be wondering if Mindhunter Season 2 will be about the BTK Killer? Well, the series hasn't been officially renewed yet, but if (when) it is, there's a good chance it will revisit the creepy mustachioed ADT tech guy in Kansas that appeared for a few brief minutes in the beginning of many of the episodes. Warning: minor plot spoilers ahead.

Though the main characters in the show did spend some time analyzing crime scenes and solving murders, the main story was mostly about Holden Ford — based on real life FBI agent John E. Douglas — and his crusade to introduce new behavioral psychology practices to the bureau by interviewing serial killers and trying to get inside their heads. The series included several moments set in Park City, Kansas, in which an ADT worker is shown with gloves, practicing knots, and mailing a letter. All of these odd, sinister moments, as well as the setting and the look of the man himself, bare unquestionable similarities to Dennis Rader, known as the BTK Killer.

Dennis Rader murdered 10 people between the years of 1974 and 1991 before his capture in 2005. Rader was married with two children, and seemed to live an extraordinarily normal life. He was known as a pillar of the community, prominent in his local Lutheran church, and a Boy Scout Leader to his son's boy scout troupe. During the time of the murders, Rader would send taunting messages to the police, signing them "BTK" for "Bind Torture Kill" which eventually led to the nickname that he is still known by. He evaded arrest for over 30 years, before his own arrogance led to his downfall.

He resurfaced in the early 2000s, beginning again to send messages to the local police. This time they were able to trace the messages back to him, and he eventually confessed to the murders. You can watch his confession here if you would like never to sleep again. It is disturbing in the extreme.

Some of Rader's smaller traits appear in the show. For example, in his first appearance in the cold open of the second episode, the character presumed to be Rader is a stickler about office supplies. A man is searching for electrical tape and the Rader character insists the man bring him the empty container before he'll replace the electrical tape. When asked if he's kidding, Rader says blankly "No." It is weirdly creepy. And apparently true to life. A People article following Rader's arrest described him as being just as bizarre. The outlet reported a former ADT coworker as saying, "Dennis was very staunch for doing things by the book. He wasn’t a guy who joked around." Other reports state that, as a Park City compliance officer, he actually measured grass and handed out citations if it was too long.

The final episode of the series opens with Rader burning drawings of women bound and tortured in his yard. The rest of the episode is devoted to Holden and his last interview with Ed Kemper, which doesn't end well, to say the least. The murders of the BTK Killer haven't been brought to Holden and his team's attention yet. And following the fall-out after the officials found the incriminating tape Holden had hidden from them and his subsequent post-Kemper panic attack, the future of his very department seems to be in jeopardy.

Because the real-life Rader was not captured until 2005, I have an inkling that if he does show up in the second season (assuming it's coming), Holden will not get to triumphantly use his new profiling techniques to get the bad guy. Rather, Rader could serve as some sort of personal struggle for Holden, who can't outsmart him. That being said, David Fincher, a showrunner of the series, has indicated that Season 2 will focus on the Atlanta child murders. In either case, I am both terrified and excited.