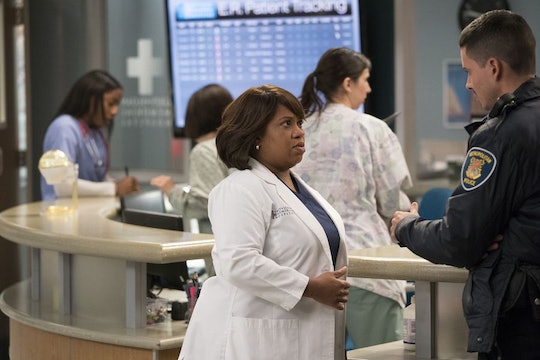 Bailey's Life May Be In Jeopardy On 'Grey's Anatomy' — VIDEO

A lot of characters have come and gone over the course of Grey's 14 seasons, but there are still a few that have been around since Day 1. One of those OG characters is Bailey and she's been an absolute fan favorite due to her hardcore medical skills and her badass persona. Fans have watched her have a baby, get divorced, marry someone new, and work her way up in the hospital to become the Chief of Surgery.

Although Bailey has certainly had her slip ups and difficult times, she's always been a beloved character and while there are debates about other characters on the show, for the most part no one has ever had anything bad to say about Bailey. Hence why many fans are now stressed about her potential death in next week's episode.

In the preview, Bailey is seen walking into a hospital that doesn't look like Grey Sloan Memorial, where she informs the nurse that she believes she is having a heart attack. She's then seen in a hospital gown telling Webber and Maggie that she won't let a blocked artery take her down. Unfortunately, it looks her body has its own ideas.

Bailey is later shown being laid out, someone placing an oxygen mask on her, as the now familiar sound of a heart monitor flatlining is heard in the background. Ben is also shown running after receiving a phone call, presumably to get to Bailey before it's too late. Thus, things are not looking good for Bailey at all, but would show creator Shonda Rhimes really kill off such a loved character? Well, she's done it before (RIP Derek) so it's not totally unbelievable.

Still, Bailey's death would be incredibly surprising, especially since there has been no lead up to it whatsoever. Up to this point, Bailey's biggest issue was the fact that Ben revealed he no longer wants to be a doctor and wants to switch to firefighting. Otherwise, Bailey has been her healthy self. However, if Grey's has taught us anything it's that a person's health could change in an instant.

But to kill off Bailey just doesn't seem right. For one, what purpose would it serve other than to break fans' hearts? Derek was killed off because Patrick Dempsey, who played Derek, wanted to exit the show. There's been no such rumors about Chandra Wilson exiting the show. Therefore, it seems much more likely that this preview is just meant to make fans worry, which it has done successfully, I might add. Most likely, it'll turn out that Bailey survives and perhaps she may need to change her diet and start exercising more, but she'll live.

To take away Bailey right now, especially when this season is supposed to be a happier season than those in the past, would be totally messed up. Not to mention, I can't imagine how Ben is supposed to jump on over to the new spin-off series, Station 19, and still return to Grey's for crossovers if he's not returning to his wife. It just doesn't add up.

So Bailey's not going to die. I won't allow it and I don't think Rhimes will either. Everyone just relax, this is not the end for Bailey. She's only just getting started.