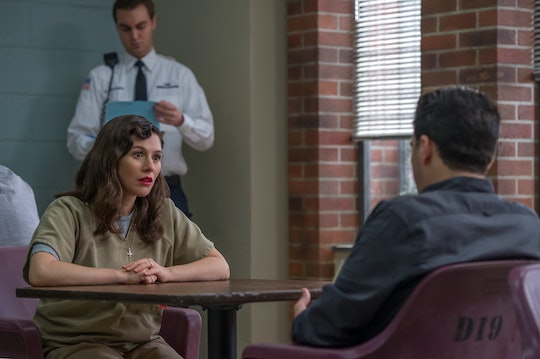 Will Morello Have A Baby On 'Orange Is The New Black'? Her Character Is Ready For A Change

(Warning: This post contains spoilers from Orange Is the New Black Season 4, Episode 8.) Season 3 of Orange Is the New Black ended with an impromptu prisoner escape, and a shotgun wedding for Morello and her new love, Vinny. While reciting vows stolen from the hit Foreigner song, "I Want To Know What Love Is," Morello promised herself to a man she met while prison speed-dating; her yin to a yang previously filled by Christopher, the man she was in prison for stalking. As her newfound marriage progresses by way of conjugal visits and phone sex, many viewers were left wondering, "Will Morello have a baby on Orange Is The New Black?"

It's clear that having a baby is in the forefront of Morello's mind. Not long after she consummated her marriage against a vending machine at Litchfield, she waxed nostalgic about her wedding and the "sperm still inside of her." It's not beyond the realm of Orange Is The New Black possibility to assume that, even in prison, Morello wants to become a mother as quickly as humanly possible. After all, she's always been one to be in a serious relationship (whether it was with a man she barely knew and ultimately stalked, or a fellow inmate who she constantly tried to convince herself she didn't have legitimate feelings for) and in the absence of constant physical constant, a baby would provide the safety and security Morello seems to constantly seek out.

Of course, because this is Orange Is The New Black we're talking about, there is one problem standing in the way of successful procreation: fear. After Morello doesn't hear from her new husband in a few weeks, she asks her sister to spend time with him. She wants to make sure she isn't being cheated on by her new spouse; a spouse that she doesn't necessarily know (as she can't even tell Vause what his favorite color is); a spouse she clearly doesn't trust; a spouse that, well, probably shouldn't be a spouse in the first place. After her sister returns, telling Morello that Vinny is kind and funny and isn't cheating but it just a genuinely nice guy, Morello becomes suspicious and accuses her sister of sleeping with her husband. She asks her sister what she wore when she met up with Vinny, and promises her sister that she wouldn't have asked her to spend any significant amount of time with her husband if she knew her sister was a "whore."

Tensions comes to a head as Morello finally has the chance to speak with her husband, during episode 12, titled, "The Animals." After Vinny explains where he has been and why he hasn't been as present, Morello asks about the people her husband is spending his time with. After realizing that her husband likes caramel, just like her sister, Morello accuses her husband of cheating on her. "I'm not stupid, you know? You're not pulling any wool over these eyes, no sir." Vinny asks what Morello is talking about, so which she replies, "I'm talking about you pulling your dick out of your pants and sticking it in my sister." Vinny knows that Morello specifically asked her sister to spend time with him in an attempt to "be a family," and in a few more heated exchanges, Vinny has a moment of clarity and says, "Oh my god, you're crazy."

Perhaps, in any normal instance, Morello's response and subsequent reaction would be "crazy," but knowing her backstory and knowing what prison does to the women (hell, people) in it, it's somewhat understandable that Morello would jump to a potentially ridiculous conclusion. And since it takes a few weeks and/or even months before a woman even realizes she's pregnant, Morello could very well be carrying the fetus of the man she has just accused of infidelity.

In true Orange Is The New Black fashion, it will probably take another season to figure out whether or not Morello will become a mother and, well, Jenji Kohan is both the best and the absolute worst.