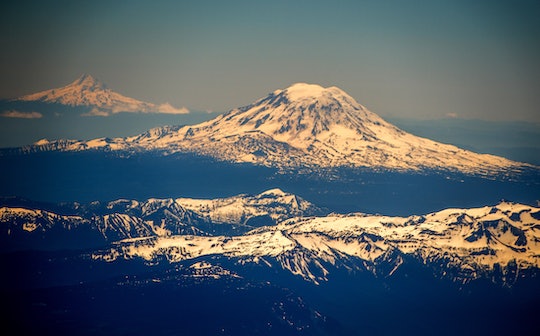 Will Mt. St. Helens Erupt? Recent Earthquakes Give Us A Clue

As a child, I was fascinated with volcanoes. The way they were pictured in cartoons and in movies made them seem so interesting. The picture of a brown mountain and bright red lava oozing from it always made them out to be so pretty. But volcanoes don't actually look like that in real life and are actually a serious threat with plenty of ominous warnings for surrounding cities to take heed of. So with all the recent earthquakes in Washington state, the question "will Mt. St. Helens erupt" might not actually seem so far-fetched.

The earthquakes actually give us at least a few clues as to whether there might be volcanic activity happening beneath Mt. St. Helens, the famous and geologically young mountain that sits along the Cascade Range. According to Wired, using certain seismological tech, you can determine the movement of magma during the times when earthquakes aren't occurring. Piece together these periods and you can see whether or not a volcano is waking up.

Since the beginning of 2016, Mt. St. Helens has been experiencing a string of seismic activity beneath its surface. Scientists at the United States Geological Survey (USGS) have been interpreting this swarm of earthquakes, some 130 small tremors over a period of eight weeks, as a "recharging" period for the volcano — involving the rising of magma in the volcano as it lies peacefully otherwise.

But does this mean that Mt. St. Helens will erupt? Well, the jury is still out on that one, but Uproxx's Zach Johnston says it is not likely. Johnston claims that, according to aggregated data from the USGS, the volcano has experienced these patterns of micro-quakes underneath the volcano's surface several times before, both back in the 1990's and again recently in 2013 and 2014. The earthquakes are simply allowing the mountain to effectively let off some steam (or in this case seismic pressure) before it can seriously overflow. Johnston claims that Mt. St. Helens simply does not have enough juice to erupt.

The USGS itself is skeptical that Mt. St. Helens will erupt the same way it did back in 1980, when it became the most studied volcanic eruption in the United States in the 20th century. The volcanic eruption that year killed 57 people and was considered one of the worst natural disasters to ever strike the United States. The initial blast flattened 150,000 acres of trees, triggered one of the largest landslides ever witnessed, and ash flew as far away as Central Montana from the eruption.

Before it's eruption, many people were unaware that powerful volcanoes still existed in the United States and could erupt once again with little to do to stop it. So therefore any potential sign that Mt. St. Helens might be active once again, is terrifying for a lot of people.

Still, the USGS urges caution in getting too worked up. "... There is absolutely no sign that [Mt. St. Helens] will erupt anytime soon, but the data we collect tells us that the volcano is still very much alive," officials said, according to CNN this week. In a statement on the USGS website, a spokesperson stated that "no anomalous gases, increases in ground inflation or shallow seismicity have been detected with this swarm, and there are no signs of an imminent eruption."

While I personally don't believe Mt. St. Helens will erupt again anytime soon, I know I, and many others, will be keeping a very close eye on it as we watch the news regardless.