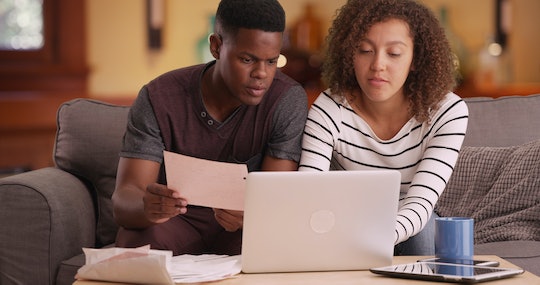 Here's When The New Tax Plan Will Take Effect

Now that President Donald Trump has officially signed the Tax Cuts and Jobs Act of 2017 into law (previously known as the "Cut Cut Cut Act," no, really), people might be curious about just where those cuts are, and if they'll be seeing them in their paychecks and 1040s next year. If you're wondering, will my 2017 taxes change?, the good news is that Trump doesn't have a time machine (yet), so he can't go back to the beginning of the year and snatch up more of your wages. But you might be feeling the effects sooner than you think.

There's probably no need to do anything just yet, unless you're particularly wealthy. According to the New York Times, if you pay a lot in property tax or give a ton to charity, you'll save by getting those out of the way before the year ends, when the deduction caps change. And if you send (or plan to send) your child to private school and want to take advantage of that new 529 savings plan rule, you can start socking away money immediately. But let's be honest, if you fall into one of those categories, you probably already have a professional taking care of all that for you.

Let's talk about your average American who isn't fretting about whether their children will inherit all of their billions, or just most of their billions, when they die. Your withholding, the amount of money your employer deducts from your paycheck, is probably going to change, and although the new tax plan takes effect on Jan. 1, it's going to be a bit of a scramble to get that figured out. The IRS issued a statement saying that new guidance will be issued sometime in January, so your take-home pay could change in February. The new tax plan has eliminated personal exemptions, which means that the W-4 form you filled out when you were hired — that thing where you can never remember if you're supposed to put a 1 or a 0 — will need to be updated. Once the federal government creates and issues the new forms, expect Sandra in HR to be very harried for a couple of months.

If you had a lot of medical problems this year, first of all, I'm sorry, and I hope you're feeling better. But you actually picked a great time to get sick or injured, because while deducting medical expenses wasn't usually the best choice for many taxpayers — it only helped if they exceeded 10 percent of your income — that limit will drop down to 7.5 percent for 2017 and 2018, according to USA Today, so you could possibly get a better refund next year. The threshold will return to 10 percent in 2019, though, so look both ways before crossing the street and be sure to eat your vegetables going forward.

The big changes will come in 2019, starting with the repeal of the individual mandate penalty in January. That means that although technically, legally, you will still be required to have health insurance, you'll no longer be fined if you don't, so there's no tax incentive to keep it. Slow down; I said no tax incentive, not no incentive whatsoever. You never know what random accident or illness might strike, even if you're normally a very healthy person, and don't forget that it'll be harder to deduct your medical bill again this year. Also, if you're a healthy person forgoing insurance, you're screwing over everyone else by making their premiums go up, so maybe take one for the team?

Now for the bit you're really interested in: will you pay less taxes? Probably, for a while. You can plug your numbers into this tax calculator by Marketwatch to see what you'll owe (assuming you can correctly estimate what you'll make next year), or check out these tax tables by Fortune that show your old and new brackets. If you're in the lowest one, things are staying the same, and if you're in the fifth or sixth, I'd like to congratulate you on doing very well for yourself, and gently break the news that your rate may go up. If you're in the middle, like most of us, or the top bracket, like Trump and co., congratulations, your rate is going down! For now. The new rates expire in 2025, unless Congress does something about it, so you could end up paying more, especially since the country will be $2 trillion in the hole by then. Time to start burying gold bars in the yard, I guess.