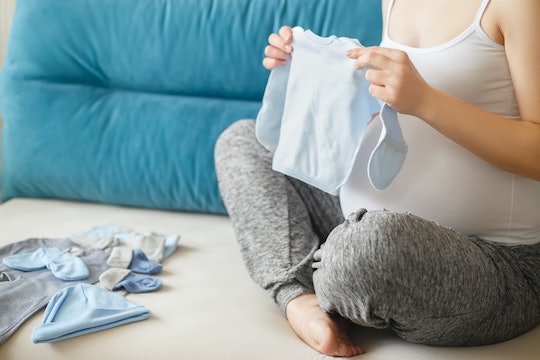 Before Stocking Up On Newborn-Sized Clothes, Here's What You Should Consider

One of my favorite things in the world is shopping for baby clothes. Holy cow, they're so cute and tiny, I can't help myself. And can we talk about the prints for a minute? My kids wore more raccoons and duckies than what was probably reasonable. But honestly, I worried about buying the tiny versions. I had a few friends and family members who had pretty darned big babies, and I wondered, will my baby be too big for newborn clothes? Because I've seen it happen, and I was a mite concerned.

The thing about newborn clothes is that they aren't meant to be worn for long to begin with, so there's not a lot of variation in the relative roominess of the fit. Most manufacturers, like baby clothing giant Carter's, list the newborn sizes as fitting babies 6 to 9 pounds and 18.5 to 21.5 inches long. That sounds like a big range, but it's really not. According to the University of Michigan, these measurements are the exact reading of averages. However, babies have been getting steadily bigger over the past few years, noted NBC News. It stands to reason that some of us will end up having babies who are much too big for those tiny onesies.

What's the reason why babies are getting so much bigger, and how can you tell if your baby will be too big for newborn clothes? NBC News reported, "There’s been a 15 percent to 25 percent increase in babies weighing 8 pounds, 13 ounces or more" and that it could be the result of a few things, but primarily, it's maternal obesity. The rates of maternal obesity have been steadily increasing across the globe, and it's a vicious cycle.

Dr. Kristin Atkins, a specialist in maternal and fetal medicine at the University of Maryland School of Medicine, told LiveScience that "later in life, these babies face an increased risk for obesity, diabetes and metabolic syndrome." That means that big babies are more likely to become obese adults who are more at risk of giving birth to babies who are what's known as "large for gestational age" (LGA). But The Children's Hospital of Philadelphia remarked that obesity is not the only risk factor for a baby born a bit larger than average. They wrote that mothers who have gestational diabetes, or families with a strong history of large babies are equally likely to produce a baby born LGA.

There's yet another reason why you may give birth to a particularly juicy little babe, and that's the luck of the draw. One of my very best friends is, in a word, tiny. She's 5'2", didn't gain a ton of weight during her pregnancy, and is a really healthy eater. Even after a solid four month bedrest, her little jellybean was just under 10 pounds and 22 inches long. I still marvel at how she fit all of him in her uterus, because he was practically a toddler. Earlier that same year, another one of my good friends who was healthy with no diabetes, gave birth to an even bigger baby. Sometimes, it just happens. Neither of their babies went home in newborn clothes.

If you're wondering if you should buy some newborn clothes, it's a tough call. According to the University of Rochester Medical Center, it's hard to tell if it's your first baby, but your healthcare team can try to guess through ultrasound and feeling your belly. But if it's your second or third and you have a history of big babies? You might just want to size up, because it doesn't take much to tip a baby over the upper levels of the newborn size limit. Grab plenty of 0 - 3 month size clothes and keep family and friends in the loop if your baby ends up needing a few newborn sleepers. They'll be more than happy to go shopping for you.

More Like This
Fun, Sexy Maternity Lingerie, For When The Mood Strikes
Gaelic Boy Names You Won’t Hear Every Day
22 Zesty “Z” Names for Boys
60 Western Names To Tip Your Hat To
What Parents Are Talking About — Delivered Straight To Your Inbox