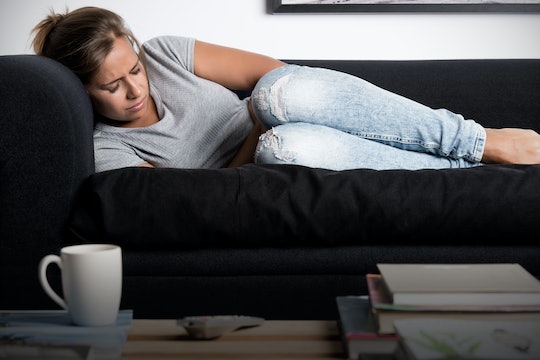 The Truth About Pain & Your First Postpartum Period

When you were pregnant, you enjoyed almost an entire year without getting your period. Alas, all good thing come to an end and after giving birth your period will eventually return. Of course, as with everything after baby, your period probably won't be the same as it was before you got pregnant. Wondering if your first postpartum period will be more painful than before is a common question on most new moms' mind. After giving birth, it would make sense that your first period postpartum would be more intense than usual, but unfortunately, there's no way to really know for sure.

According to Parents, your first postpartum period will be about as unpredictable as your pregnancy, and labor. For non-nursing moms, periods usually return within six to eight weeks after giving birth. If you're breastfeeding, the return of your period is more erratic. Some get their period within the six to eight week range while others can go six months or more without ovulating.

When it comes to how your first postpartum period will feel, there's no real way to tell until it happens. Today's Parent explained how some moms who had terrible pre-pregnancy periods — try saying that five times fast — experienced no pain at all when their periods returned. Other moms who had relatively easy periods, noticed that their periods were more intense or lasted longer after giving birth. It's annoying, I know. But that's how it works.

Healthline noted that your very first postpartum period might be heavier than you expected since your hormone levels are fluctuating. From there, your periods may be erratic and unpredictable, but after a few cycles things should start to be regular and similar to the way they were before you had your little one.

Although you won't be able to predict how your period will go, knowing that each cycle will likely be a little bit different will at least help you expect the unexpected.