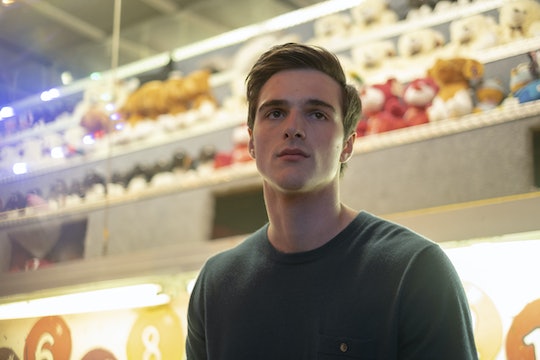 Someone Needs To End Nate's Reign Of Terror On 'Euphoria'

Tension has been ramping up on HBO's Euphoria as it hurtles towards its first season finale. When the final episode airs on Aug. 4, it may contain some shocking developments — not least because Nate's complicated web of violence and blackmail appears to be facing more outside pressure than ever before. Episode 7 saw Nate receive an outright threat from Fezco for his continual harassment of Jules, but will Nate die on Euphoria, or is that just wishful thinking?

I can't be the only one hoping Nate kicks the bucket. Nearly every minute of his screen time has been devoted to abusing those around him. He's violent and manipulative with his girlfriend Maddie; he brutalized a guy Maddie once slept with and then framed him for assault; he catfished Jules only to get naked pictures of her that he could later blackmail her with. He thinks he's untouchable because, in a way, he is. He's a white cis male athlete from a wealthy and prominent family who has always gotten what he wanted. He probably believes that will always be the case, and has no compunction about trampling over other people's live to guarantee it.

But that might be his downfall in the end.

The suspicion surrounding Nate is increasing. Though he momentarily deflected blame from Maddie's assault onto someone else, there are a few characters who are growing ever warier of Nate. His father, for one, seems concerned by Nate's aggression even if he hasn't taken any steps to do anything about it (you know, as is the job of a parent). But Detective Rue is the one most passionate about getting to the bottom of things, which could prove dangerous to Nate.

Rue doesn't get all the details right in "The Trials and Tribulations of Trying to Pee While Depressed," but she knows something is going on with Nate and Jules. She knows Nate is not to be trusted. And she's also willing to take action to ensure he doesn't hurt her friends anymore. She spoke to Fezco about putting a little bit of fear into Nate, which Fez did by casually threatening him later that same night. Nate retaliated by calling the cops on Fez, which may inspire Fez to level up his threats. Now he has one more reason to have it out for Nate, because Nate put his friends and then his livelihood in jeopardy. Perhaps Fez will take Nate out, just like he threatened to.

But I'm not so sure. If Nate dies, I can't imagine that a tertiary (if delightful!) character like Fez would be the one to kill him. Jules' trip in Episode 7 made it clear that she has a lot of rage towards Nate for the position he put her in. She might expose what he's done (even if it gets her in trouble) or explode one day soon and hurt him. Their fight in Episode 1, in which Jules cut her arm to make a point to Nate, might have been mere foreshadowing for another, larger conflict they would have in the finale.

There's no way to know with any certainty ahead of time whether or not Nate will die. But it does seem like the tension is escalating to some kind of showdown between the main characters and Nate. And I'm not convinced that he'll come out of that encounter alive.