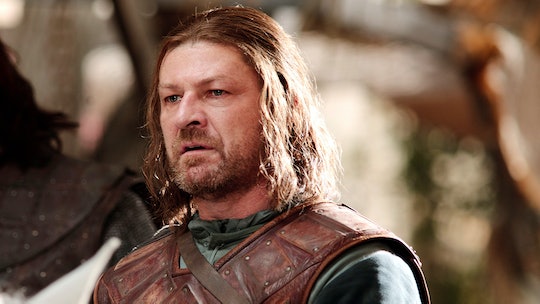 Will Ned Stark Return To 'Game Of Thrones' Season 6? Not In The Way You May Think

There will always be speculation about characters returning to hit shows, but Game of Thrones is on another playing field when it comes to speculating and whispering around the internet. One of those returning characters in question is Ned Stark. Leading into Season 6, fans might be wondering if Ned Stark is returning to Game of Thrones Season 6. Well, Ned Stark might be returning, but not in the way you might expect to see him.

Since we see Bran Stark cultivating that whole vision power thing in the Season 6 trailer, we can presume that this is how we'll get to meet a young Ned Stark in a flashback, since Game of Thrones isn’t known for an overabundance of the use of flashbacks. (Also, perhaps, we'll see the R+L=J theory explained, but that's just a pipe dream.)

The last time we saw any version of Ned Stark, it was his decapitated head on display for Joffrey to mock and force Sansa to look at. And before that, he was being held for all of King's Landing to see before his execution for trying to call out the royal family as the bunch of illegitimate and incestuous people they are. So yeah, it'll be nice to see him again, in a state of being very much alive, even if it won't be Sean Bean reprising the role.

Seeing a young Ned Stark may best serve as a way to not only show Bran's ability to see super clearly into the past, but to also give more insight into Ned's life leading up to his sister's kidnapping by Raegar Targaryen and subsequent years spent at the Tower of Joy. If we remember correctly, Lyanna was living as Raegar's prisoner for years before Ned was able to charge the soldiers outside and find her in the Tower of Joy covered in blood and begging him to make her a promise during her final minutes before death. Of course, we all believe (or at least desperately want to believe) that the promise was to take care of her newborn son, a la Jon Snow.

Ned Stark may be returning to Game of Thrones Season 6, but no, it will not be a case of seeing the Lord of Winterfell in his former glory, here to save the day for his sort of doomed children. At least we get to see him at all, in a way to hopefully further the theory of R+L=J, because when it comes down to it, fans are more than ready for Season 6 of Game of Thrones to be all about that theory. And, with Ned Stark returning for Season 6, it makes it that much more possible to be legit.