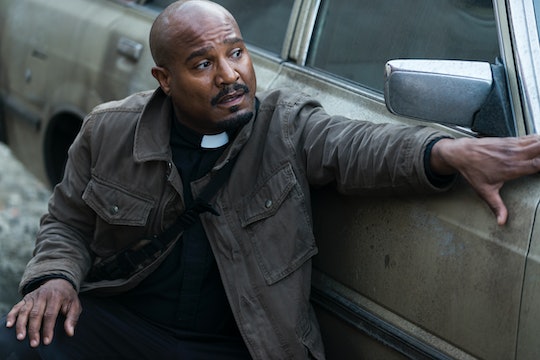 They say that no good deed goes unpunished and in the world of The Walking Dead, that couldn't be more true. Just ask Father Gabriel. After Team Rick saw a quick (if not minor) victory in their first showdown against Negan, it was time to move on to the next phrase of the plan. However, just when he was about to leave, Father Gabriel decided to do a good deed and it led him to getting stuck in a trailer with Negan himself. So will Negan kill Father Gabriel on The Walking Dead? It's not entirely out of the question.

Those of you familiar with The Walking Dead comics know that this is not the way Father Gabriel ends up meeting his maker. But that doesn't necessarily make him safe from Negan's wrath on the series. As the AMC drama has proven time and time again, it isn't afraid to deviate from its source material. Andrea is alive in the comics, but dead on the show. Meanwhile, Carol's fate is the exact opposite of that — she's dead in the comics and yet still alive on the show. So there's no exact formula to work with when it comes to predicting each character's fate, which means Father Gabriel could be in a whole lot of trouble.

Negan isn't exactly a nice guy to begin with, and given the minor battle he just lost, I very much doubt he's in a good mood. If he wanted to take out some of his aggression on the nearest person available to him, then the priest is definitely the most likely target. Then again, maybe Negan is secretly a man of God and wouldn't go so far as to hurt a man of the cloth. I mean, that's definitely be a surprising twist, but hey, you never know. Stranger things have happened on this show.

But let's back up and talk about how Father Gabriel got into this mess in the first place. It basically begins and ends with the Hilltop leader, Gregory. After trying and failing to get his people to side with the Saviors, Gregory was pushed down the stairs and directly in the line of fire when the battle ensued. He was still alive at the end of it all, but unable to escape. So Gabriel decided to try and rescue him from harm. But he picked the wrong moment to be a hero.

Not only did Gregory leave him behind — thereby forcing him to retreat to a trailer surrounded by walkers — but said trailer just so happened to be the hiding place of Negan. Which means the two of them are trapped together in the small, cramped space until the undead either break through and kill them or lose interest and go away. Either way, it means they're stuck together for an undermined amount of time. Negan proved to be just as dramatic as ever, asking Gabriel is he had his "sh*tting pants on" since he was about to sh*t his pants.

But does this mean he plans on killing the man he's stuck with? While I wouldn't put it past him, I also don't think that Negan will view that as the smart decision. Don't forget that this is a calculated and cunning character we're dealing with. He knows that this guy with him is one of Rick's men. So if he wants to pay Rick back for what just happened, it might be in his best interest to let Gabriel live for now. I think he'll become part of Negan's leverage, which is arguably the more terrifying scenario.