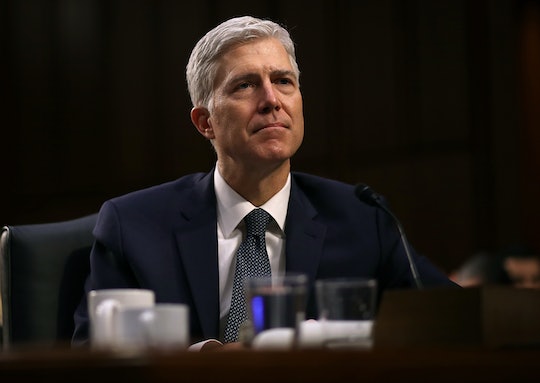 Will Neil Gorsuch Be Confirmed?

Of all the controversial confirmation hearings of appointees by President Donald Trump, Monday's hearing for the appointment of Neil Gorsuch to the Supreme Court could have the longest lasting ramifications. Since Supreme Court nominees are appointed for life terms, Gorsuch won't lose his post when a new administration takes after Trump, as other appointees will. But will Neil Gorsuch be confirmed? Democrats had planned to filibuster his nomination, and as of Monday afternoon they got the votes they needed in order to do so.

Gorsuch was not particularly well-known outside of the 10th Circuit Court of Appeals, where he's been a federal judge for more than a decade, until he was tapped for the Supreme Court by Trump. Now, he's become one of the most familiar faces in U.S. news and politics ahead of his confirmation hearing. Gorsuch is a conservative judge with an established history and many bylines in law publications under his belt, so for Republicans the decision to appoint him seemed straightforward enough. Many Democrats, however, are not so sure. Unlike concerns with previous cabinet appointments made by Trump (where the issue was primarily lack of experience) that's not where concerns about Gorsuch seem to stem. Many Democrats reportedly have less concern with Gorsuch specifically as they do with the process by which he became the nominee, according to The New York Times.

Former President Barack Obama nominated Merrick Garland to fill the vacant spot on the Supreme Court left by the death of Justice Anthony Scalia, but he was never confirmed, according to The New York Times. Republicans effectively "stonewalled" Garland's confirmation so that it would not happen within the required timeframe. The justification was that a nomination should not be made during an election year by a sitting president, but rather, that the incoming president should get to make the appointment. That ultimately meant the task of appointing a new member of the highest court in the land fell to Trump.

A nominee to the Supreme Court needs 60 votes in order to be confirmed, though there has been some talk about the possibility of the "nuclear option" being brought into play if Democrats attempt a filibuster. As of Monday afternoon Democrats had enough votes to do so, according to The New York Times. Senate Majority Leader Mitch McConnell may, in that case, move to change the rules to allow the nomination to be confirmed with just 51 votes, according to CNN. That means Gorsuch's nomination could, essentially, be confirmed in the absence of bipartisan support. Called the "nuclear option" because it is very much a last resort — and would more or less begin to deconstruct the very principles of the Senate's governance, according to NPR. And, in broader terms, the foundation of U.S. democracy — something which many feel is already becoming perilously thin.

Using the nuclear option on "lesser" appointments has happened, and not without controversy, but invoking it for something as serious as a Supreme Court appointment has many concerned. To appoint a Supreme Court judge — who will serve the role for life and no doubt have a lasting impact on the country's judiciary system — without votes from both sides of the aisle would set an entirely new precedent, according to CNN.

As of Monday afternoon, there were three senators still undecided about Gorsuch's nomination, according to The People's Defense. The following two Democrats and one Independent senator have not yet made a decision. If they are one of your state senators click their name to be taken to their official contact page.