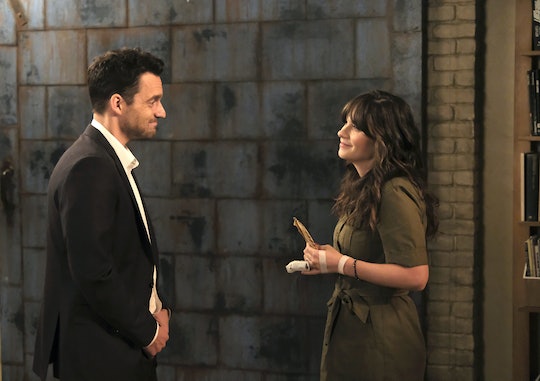 Wedding Bells Could Be In Jess & Nick's Future On 'New Girl'

Nick and Jess were the classic will they/won't they couple on New Girl, but at the end of Season 6 it looked like the couple had finally decided to be together for real. With that settled for the start of the final season, fans are hoping Nick will put a ring on it before the series comes to an end. So will Nick and Jess get married on New Girl? Thankfully, all signs point to yes. (Which is hopefully what Jess' answer will be!)

When the series returns on Tuesday night, the show will have jumped ahead three years in time, which means a lot has changed for the characters, but one thing has remained the same — Nick and Jess are still together. And based on the sneak peek TVLine revealed on Monday, it looks like Nick is about to propose to Jess.

In the short clip, Nick is seen on the phone talking to Jess' dad, Bob, who is wondering why Jess hasn't called him crying yet about being engaged. Apparently, Bob gave Nick his blessing to marry Jess six months ago, but obviously Nick still hasn't made his move. But, of course, since this is Nick we're talking about, he probably has an elaborate scheme for the proposal that if I had to make a guess, won't exactly end well.

Apparently, even though he and Jess were traveling the world together, Nick decided it would be best to propose in the loft, which kind of makes sense, considering that's where their love story began. However, Nick's plan was to have the ring Bob gave him sent to the loft from Turkey through an au pair he hired. Thus, when they get home to the loft, Jess will open the envelope and inside will be the ring. Unfortunately, this just does not sound like a solid plan for a number of reasons.

What if the au pair just stole the ring or forgot to send it? What if the ring gets lost in the mail, never to be seen again or arrives late and Nick can't actually propose that night, like he intends on doing? There are just way too many holes in this plan, but this is definitely the Nick Miller way. I would expect nothing less than for everything to fall apart during Nick's proposal, but I also think Jess will also expect a messy proposal as well. In fact, she'll probably find it endearing.

Although Nick and Jess have obviously had their ups and downs over the years, Nick has always been himself and that includes strangely moon-walking away from awkward situations and sometimes getting irrationally angry at doors. He can be quite strange at times, but almost everything he does comes from a good place and Jess will know that. So whether Nick actually pulls off his proposal or if it goes terribly wrong, I'm pretty sure we can expect Jess to still say yes, which means a wedding is most definitely in the cards for this season.

With the time jump, Nick and Jess are most likely the only ones left in the friend group who aren't married. Fans saw Schmidt and Cece get married last season and Winston and Ally got engaged. Granted, not everyone has to get married in order to be in a loving and committed relationship. But this seems to be something that Jess has always wanted at some point, and I'm always up for a good TV proposal.

Nick and Jess' marriage is pretty much inevitable at this point, but as is always the case on New Girl, fans can probably still expect some curveball to throw off any wedding plans this season. Even so, with just eight episodes total to wrap up the series, whatever happens probably won't be major, just something funny to give viewers a few more laughs. I just hope everyone in the gang gets the happily ever after they so deserve.