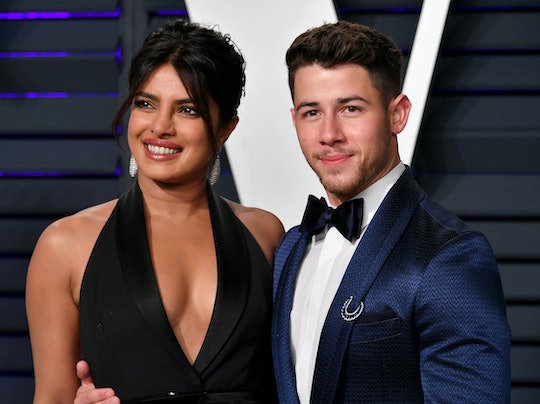 Nick Jonas Addressed Whether He & Priyanka Chopra Will Have Kids Soon

When it comes to celebrities, it seems like fans are on 24/7 "bump watch" from the moment a relationship is confirmed. I realize fans are excited and only want the best for their favorite stars. But Nick Jonas and Priyanka Chopra have only been married for a hot minute, and there's already been a ton of speculation about when/if they'll start a family. So will Nick Jonas and Priyanka Chopra have kids soon? Nick recently tackled the subject.

As you probably heard, Jonas and Chopra tied the knot in December with not one but two ceremonies — a traditional Hindu Indian ceremony and a western Christian ceremony, according to The Knot. Before their nuptials, the couple had a whirlwind relationship. Although they've known each other since 2016, they didn't officially start dating until May 2018, according to INSIDER. And then Nick popped the question in July, though the couple didn't confirm it themselves on social media until August. With this in mind, it wouldn't be too much of a surprise if Jonas and Chopra decided to also put having a baby on the fast track.

But are Nick and Priyanka planning on starting a family soon? The newlywed was promoting his new animated film UglyDolls when he gave a huge clue.

During a recent interview with Extra, Jonas shared, “We’re taking our time.” Hmmm. So in a few months? Next year? It's hard to say, for sure.

Jonas also opened up about his decision to to part of the movie, which hits theaters on May 3. "I love the music, first off. They told me also who was going to be in it, incredible cast, and the message really spoke to me," he told Extra. "We’re in a time when we need these positive messages out there, specifically this one about accepting one’s self, accepting others, understanding that the imperfections are what makes us perfect and special, finding those friends that you can go through anything with."

But back to the whole baby business. Although it looks like fans shouldn't expect a pregnancy announcement from Jonas and Chopra next week, it's not exactly news that they want kids. Jonas himself told Cosmopolitan in August that he would like to be a father one day. "[Having a family of my own] is the goal," the told magazine. "It’s definitely something that I hope will happen." The experience that he's had with his brother Kevin's daughters, Valentina and Alena, will undoubtedly come in handy one day. "The best part about being an uncle is that it’s like training wheels," Jonas told Cosmopolitan. "You get to spend time with these young people and have some responsibility, which is nice." He added:

I am not sure of the exact timeline. But, I need to give my nieces cousins at some point.

In case you're wondering, Chopra is also looking forward to parenthood. She just hasn't publicly laid out a timeline, either. "Marriage and kids are a big goal for me," she said in February 2018, according to India Today. "I'm a big believer in the institution of marriage and in the family, and in kids, I want to have a lot of them, if God allows."

So there you have it. Neither Nick Jonas nor Priyanka Chopra have yet to share exactly when they'd like to start a family — but it's pretty darn clear that they want it to happen eventually. Until then, fans will have to be patient and refrain from relentlessly hounding them/bump watching. One thing's for sure: If the pregnancy announcement is anything like their couple photos on Instagram, then it'll be freaking adorable.

More Like This
30 Adorable Baby Halloween Costumes, From Animals To Avocados
Experts Explain Whether It’s Safe For Your Baby To Sleep On Your Chest
The Difference Between The PICU & The NICU
43 Awesome Toys For 18-Month-Olds