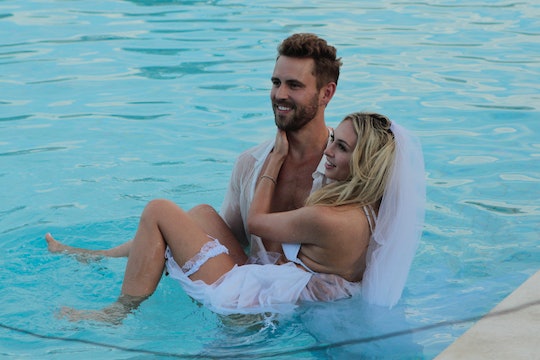 Let it be known: Corinne Olympios is absolutely and without a doubt the breakout star of Nick Viall's season of The Bachelor. Between her scene-stealing moves, her iconic one-liners, and her penchant for stirring up drama with the other women, Season 21 is pretty much Corinne's show with a splash of Nick looking for love. Since the debut of her much-tweeted-about introduction segment in the season premiere, Bachelor viewers have been talking about one aspect of Corinne's life in particular – the fact that she, a 24-year-old woman, still has a nanny. But will Nick ever meet Corinne's nanny on The Bachelor? If their romance progresses, he might.

Corinne's nanny, Raquel, was introduced alongside the rest of Corinne's family during the Miami native's debut. Viewers saw Corinne, a self-described businesswoman, ask her mother to have Raquel bring "the snack," at which point Raquel dutifully showed up with a bowl of cut cucumbers. The Bachelor's most sexually open candidate explained that she lived with (and worked with) her family – but that Raquel would be coming with her if she left. "Even if I moved out, I would have Raquel come to my house," Corinne said after explaining how heavily she relies on her nanny.

While it's still early in their romance, it's fair to wonder whether Nick will ever encounter Raquel face to face – and what his reaction might be. We already know, thanks to an appearance on Jimmy Kimmel Live, that at some point during filming, Nick does find out about the existence of Raquel. Per a recently release TV Guide sneak peek at the next episode, Corinne's fellow contestants also discuss her nanny. But knowing about it and seeing it firsthand are two completely separate things.

A Nick-Raquel encounter would be reality TV humor gold – especially since Nick is such a sarcastic, joke-y person. He clearly likes Corinne, based on all of their interactions thus far. Corinne won the first kiss pretty soon into the first night's cocktail party and has since made out with him several times. Plus, of course, there was the bonus now-infamous boob-grab. Corinne may be forward, but Nick is definitely into it (and into her), so it's totally plausible that she'll make it far in the competition.

If Nick does continue to fall for Corinne and brings her to the final four, we all know what that means – a hometown date to the Olympios family's Miami abode will be in store. At that point, Nick would definitely meet Raquel, who is presumably back in Florida with Corinne's parents and her younger sister, Taylor, as we speak. Jury's still out on whether he'll be amused, horrified, or somewhere in between after seeing that Corinne apparently cannot be counted upon to cut vegetables for herself.