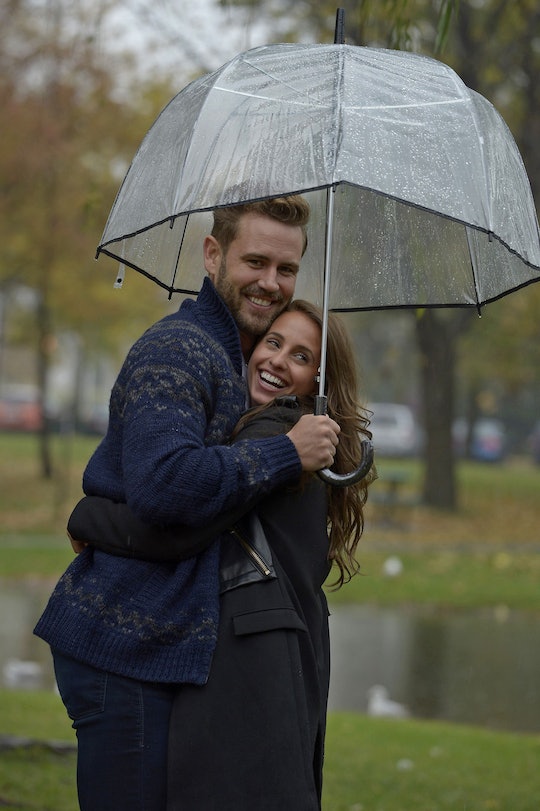 As The Bachelor heads into its final week, Nick Viall is left with just two women to choose between. At this point, Nick has formed strong (albeit very different) connections with Raven Gates and Vanessa Grimaldi. Raven and Nick have seemingly had an easier relationship, not spending much time debating serious questions about their future. On the flip side, Nick and Vanessa have struggled a bit more with how they'd make a long-term relationship work. These tense talks have left viewers with one major question — will Nick and Vanessa move in together after The Bachelor?

On the most recent episode, Nick finally had his overnight date with Vanessa in Finland. In between darting back and forth to the deeply unpleasant-looking outdoor ice bath, the couple were able to continue the conversation they'd began several weeks earlier — the question of where they'd live if they did get engaged and what compromises they'd be willing to make in a relationship.

Nick and Vanessa connected very early on in the season, when Nick first noticed that the Montreal native was "a keeper" the second she stepped out of the limo. Unlike Nick's relationship with Raven (which only began to bloom several weeks into the season), Nick and Vanessa started off strong with their early Zero-G one-on-one date, and their relationship progressed steadily from then on. While they had their disagreements near the beginning of the season (like Vanessa setting him straight about the concerns she had about Nick and Corinne's relationship), it was mostly smooth sailing — until Vanessa' hometown date.

At that point, Vanessa's family questioned Nick about the logistics of how their relationship would work, including where the two would live, if they did wind up getting engaged. Nick was clearly uncomfortable with the idea of committing to living in Montreal, and Vanessa was concerned about that. Through the hometown date, it was made abundantly clear just how close the special ed teacher is to her big Italian family. Living near them is obviously important to her.

Unfortunately, Nick's tune hadn't much changed by the time overnights rolled around. He was still hesitant to say he would definitely move to Canada for her and even seemed a bit wary about the fact that Vanessa's family is so close and traditional. Nick even said that, while he's moved around a lot, it's not easy for him to picture himself in Canada, noting that he's proud to be American.

Vanessa, for her part, was a bit contradictory in her stance. She said that relationships take compromise, but minutes earlier told Nick that there were some things she flat out wouldn't compromise on — like her weekly Sunday family lunches. Obviously, if Vanessa were to leave Montreal to be with Nick, continuing that tradition would be significantly harder, if not impossible. But would Nick actually move to Canada if Vanessa is his pick?

In an interview with Glamour after the Women Tell All taping, when asked whether he'd move to Canada if he chose Vanessa, Nick said that he "would do anything for love," but threw in the caveat that he does want to live in America. While that would seem like a deal-breaker bound to end their relationship, #TeamVanessa fans can still have hope. On the day before the premiere, Vanessa unequivocally told Glamour in an interview that she would be willing to leave Montreal if she found love.

Given that there's no question now that Vanessa loves Nick, it seems plausible that if they wind up together, she might move to California to be with him. Time will tell.