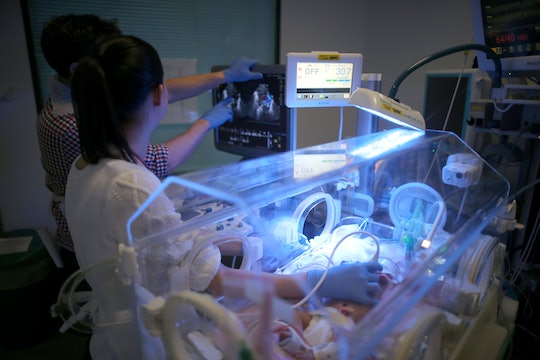 NICU Costs Could Rise Even More Under AHCA

While the plethora of questions being asked regarding the new Republican health care plan may seem overwhelming, they're pretty much 100 percent necessary. The American Health Care Act, as it's known, is the latest attempt to repeal and replace Obamacare, also known as the Affordable Care Act. And while the new legislation is still up for debate in the Senate, its potential implications are staggering. The bill allows states to decide whether or not to charge people with pre-existing conditions more for coverage. If passed, millions of Americans with these so-called pre-existing conditions could be at risk. So, will NICU costs be covered under the AHCA? Unfortunately, it doesn't look good.

While much talk of the AHCA has been concerned with what the new bill considers to be pre-existing conditions and how those affected would have to pay extremely high premiums, there's another little caveat that could prove devastating. The MacArthur Amendment to the AHCA could mean that health insurance companies could "once again set up lifetime and annual limits," as Vox reports. "This would be true not just for states that pursued the bill’s waiver, but for the entire country."

Basically, the ACA mandated that insurers couldn't place a limit on how much health care costs they cover for an individual in that person's lifetime. But the AHCA would effectively do away with that ban, meaning high-cost treatments, such as a premature infant's stay in the NICU, would no longer be entirely covered.

Prior to Obamacare, most insurance companies included a lifetime care cost limit of $1 million. For infants in the NICU, that meant that, if their stay extended beyond two or three months, their coverage would come to an abrupt halt. In a profile of one particular child, born prematurely, Vox reported,

This Obamacare provision took effect September 23, 2010. Timmy was born September 29. On December 17, he surpassed $1 million worth of bills in the neonatal intensive care unit. He didn’t leave the NICU until he was 6 months old.

If Timmy had been born a week earlier, his medical benefits could have run out while he was still in the NICU. But that didn’t happen. His insurer covered everything. The NICU bills his parents save total just over $2 million (they come out to $2,070,146.94, to be exact).

So, under the AHCA, care for kids like Timmy might end up costing a whole lot more, possibly an unbearably-large amount more. Because the new bill would allow states to waive the ban on Obamacare's lifetime cost limits, NICU stays and other long-term treatments could become much more expensive for thousands of Americans.