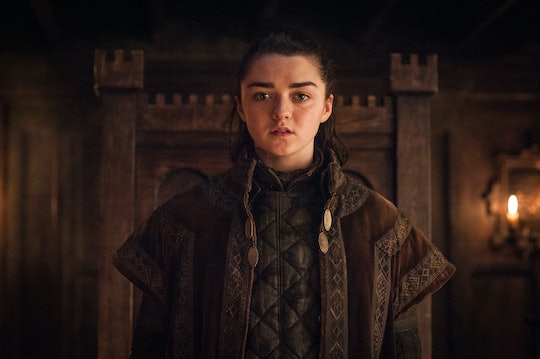 Nymeria & Arya Deserve A Better Reunion On 'Game Of Thrones'

Game of Thrones showrunners promised us that Season 7 would be one of big reunions. The surviving Stark children are closer than ever to finding their way back to each other at their ancestral seat of Winterfell — especially with Sansa as interim Queen of the North while Jon Snow runs off to make his Aunt Daenerys' acquaintance. One of the season's most speculated about reunions was between Arya and her direwolf Nymeria. She's one of the two surviving direwolves left from the pack the Stark children adopted, but will Nymeria return on Game of Thrones? Her first appearance didn't go as well as expected.

Arya, back in Westeros with her sights set on murdering Queen Cersei Lannister, abruptly abandons her plan when she learns that the Boltons have been defeated at Winterfell and Jon Snow has been instated as King of the North. She immediately turns around and rides in the opposite direction of King's Landing towards Winterfell. As she hunkers down one night in the chilly woods, Arya finds herself surrounded by a pack of wolves. Readers of the books know that Nymeria has, indeed, survived being chased off by Arya early on in the series. They also know that the way she's done that is to rally a pack of regular wolves at her command. (Direwolves have excellent powers of persuasion over common wolves.)

So book readers instantly realized that the pack of wolves surrounding Arya must be led by Nymeria. Sadly, while Arya recognized her beloved direwolf, Nymeria didn't recognize her owner. Direwolves are said to be fiercely loyal and protective of their owners — and we've seen them bail their respective Stark kids out of trouble countless times. But Arya was just a little girl, and Nymeria a pup, when she sent her away. The direwolf has been wandering the Northern forests for years and Arya has grown up a lot since they've parted ways.

Nymeria doesn't attack Arya when they reunite, but she does call off her wolf pack and head elsewhere to hunt. Devastatingly, Arya whispers, "It isn't you," which fans have taken to mean that the direwolf isn't the same pup she was when Arya chased away. It would be a thrilling moment if Nymeria reappeared in a scene when all seemed lost for Arya to rescue her in the eleventh hour, but, give Nymeria's ties to Lady Stoneheart in the books, and showrunners' insistence that Lady Stoneheart isn't going to play a part in the television series, I wouldn't be surprised if that tiny glimpse was meant to function as closure for Arya and Nymeria.