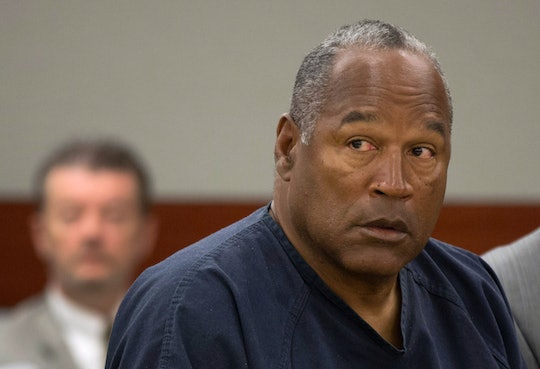 Will OJ Simpson Be Granted Parole?

On Thursday, O.J. Simpson will attend a parole hearing in connection to his 2008 conviction of kidnapping and armed robbery, crimes he committed during a botched robbery heist in Las Vegas, Nevada. Simpson, who is currently serving a nine-to-33-year sentence for the 2007 crimes, will plead his case to the Nevada Parole Board at 1 p.m. Eastern Standard Time. Given all the controversy that has surrounded Simpson over the years, many legal experts are weighing in as to whether he'll win an early release. So, will O.J. Simpson be granted parole?

When Simpson received the 33-year sentence, there were some legal experts that felt the sentence was too harsh for the crimes committed. At the time, there was speculation that Simpson received the lengthy amount of jail time as a sort of misguided retribution for the 1994 murders of his ex-wife Nicole Brown Simpson and her friend Ron Goldman. Although Simpson was acquitted of the murders in 1995, he was found "liable" for the deaths in a 1997 civil case.

Gil Garcetti, who was the Los Angeles District Attorney at the time of Simpson's 1995 trial, said, according to The Wrap:

Our job is to seek justice. Justice was not served when OJ Simpson was acquitted. But in my mind, justice was not served either when he was sentenced to 33 years for the crimes for which he was convicted. I don’t feel sorry for him being in prison. But I have a problem with the justice system when they impose 33 years on that kind of a crime. I guess it was payback.

Considering there has been debate about the appropriateness of Simpson's sentence, there is a possibility the Nevada Parole Board will decide to grant him an early release to even the scales, so to speak.

In addition, legal experts claim Simpson has been a well-behaved prisoner throughout his sentence.

I don't see any reason why he wouldn't, based on his being a model prisoner and the actions that he's taken over the years to better himself. It's going to be hard to leave out the murder situation from the parole board's minds, but in the end, they have to go by a regulated system, a point system. And if you add up the points, he's more than eligible for parole.

As for Simpson's two victims in the 2007 robbery, they will not oppose his release, according to the Washington Post. Bruce Fromong, who is one the victims, will testify on Simpson's behalf and said he is "trying to be good for O.J.," according to the Associated Press.

Although Simpson has clocked nine years as a model prisoner and has garnered the support of his victims, those factors might not be enough to set him free.

Ex-prosecutor Chris Darden said, according to the Today Show:

Legal debate aside, Simpson's fate will boil down to the parole board's assessment of 11 factors, including "criminal history, age and gender, history of alcohol and/or drug abuse, and behavior as an inmate," among others, according to the Washington Post. Although the four members of the board will also consider the testimony of Simpson, Simpson's lawyer, and Simpson's victims, his parole will largely be determined by those 11 points. If the four board members can't reach a majority vote on Simpson's parole status, two additional members will be brought in to break the tie. If Simpson is granted parole, he will be released on or shortly after Oct. 1.

Although it remains to be seen how the parole board will vote, one thing is for certain — America is still fascinated by Simpson. The parole hearing will air on most national news networks at 1 p.m. Eastern Time.

More Like This
'The Princess Diaries 3' Is Actually, Really Happening
Jason Ritter's Family Cannot Appreciate His Culinary Talents
All The Nights The Grinch Airs On TV In 2022
How To Watch Elf In 2022, Including A 24-Hour Marathon