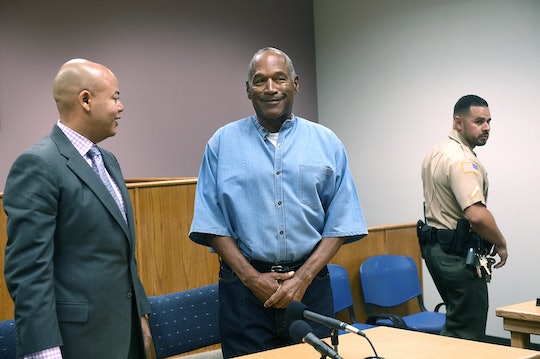 What's Next For OJ Simpson After Parole?

After nearly nine years in prison, O.J. Simpson is set to be released on parole in October. Once he is free, will O.J. Simpson get a job? According to The Guardian, The Juice, as fans knew him, has already received a number of interview requests and job offers from members of the media. His lawyers, however, have reportedly advised Simpson against accepting any such offers.

When he embarks on the next stage of his life as a free man, Simpson will have to decide how publicly he wishes to live. If he were to accept any one of the job offers from the media, Simpson would be putting himself back into the spotlight and exposing himself to public scrutiny yet again. Even today, public perception of Simpson has remained rather evenly split. One member of the parole board, Susan Jackson, stated during the hearing that the courts have received hundreds of letters of support, as well as hundreds of letters against his release.

While in prison, Simpson took courses, such as computer literacy, to prepare him for life on the outside. His comments regarding his re-entry into society suggested that he has little apprehension about facing the world:

I’m not a guy who has conflicts on the street. I’m a guy who’s got along with just about everybody.

Simpson appeared before the Nevada parole board on Thursday after being convicted of armed robbery and kidnapping in 2008. Simpson and his accomplices entered a hotel room in Las Vegas where they robbed two sports memorabilia dealers at gunpoint. He was sentenced with a prison sentence of a minimum nine years and a maximum of 33 years. After having served roughly 8-and-a-half years, Simpson's parole board voted unanimously for his release once he is eligible in October.

Earlier comments about Simpson's behavior and life in prison seem to support Smith's statement. Brooke Keast, spokeswoman for the Nevada prisons system, told CNN that he was a good prisoner. "Simpson has stayed out of trouble there," she said. "We haven't heard much from him."

Once he is released in October, Simpson will have the opportunity to make a lot of life decisions that were previously denied to him while in prison. He has yet to discuss what his career plans are, but he does have options. During his sentence, the prior-NFL star spent much of his time playing fantasy football and coaching softball – so perhaps he will make a return to the sports world. Whatever he decides to do, it will be under a new veil of freedom.

More Like This
Exclusive: 'Firebuds' Dives Into Hanukkah Traditions In Festive New Episode
Meghan Markle Spent Her Thanksgiving Volunteering For A Cause Close To Her Heart
Over 10,000 Sippy Cups & Bottles For Toddlers Recalled Due To Lead Poisoning Hazard
14 Baby Names Inspired By 'The White Lotus' That Deserve A Round Of Aperol Spritzes