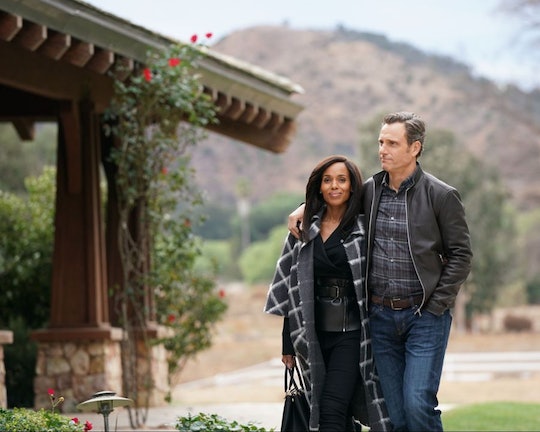 Olivia & Fitz Could Still Be Endgame On 'Scandal'

Will anyone ever forget when Olivia turned to Fitz and said, "Sweet baby?" at the end of the pilot? The reveal that Olivia was Fitz's mistress was the first major bombshell of the series and gave early evidence of what kind of show this would be. While a lot has changed over the course of the seven seasons, one thing has remained the same: "Olitz." Still, show creator Shonda Rhimes has been known to pull the rug out from under viewers, so will Olivia and Fitz really end up together on Scandal? All signs seem to point to yes right now.

As always, Olivia and Fitz are able to be there for each other in a way that no one else really ever has and that was shown throughout this season when Fitz orchestrated Olivia's intervention. While many fans still argue that Olivia didn't need to be saved from herself, the fact remains that she was pulled back into the light and Fitz was the spear header of that. Since then, the two have been growing closer and closer, until they finally hooked up (again) on last Thursday's episode.

But are these two really together again or was that just a one-and-done thing? Olivia had a rough day after thinking about killing Cyrus, only for Jake (her other ex) to show up and prove to her she didn't have the guts to kill anyone (did he forget she's killed two VPs?). Perhaps, after taking a trip down memory lane with Cyrus, Olivia wanted to be reminded of why she was pulled into this wild political world in the first place: Fitz. And it seems that despite everything that happened, Olivia realized choosing to be with Fitz was worth it.

So will this rekindling of their relationship really last to the end? My vote is a solid yes. Despite all of their break-ups and make-ups, Olivia and Fitz have always found their way back to each other. They're the definition of an endgame couple and the writers have clearly been pushing them back together again. It's no accident that Olivia's only other long-lasting relationship partner, Jake, has transformed into a full-out villain this season. The writers have totally destroyed any hope of Olivia ending up with Jake, and proven that he is not a good guy.

On the flip side, Fitz has become a hero. Not only did he lead Olivia's intervention, bringing her out of the darkness she found herself in, but then he also assisted with Annalise's Supreme Court case, going to bat for Olivia when she was at her lowest. Fitz has continued to be there for Olivia as she climbed back up the ladder in D.C. and worked to earn her white hat back. And he's been doing all of this from the comfy office of his foundation, in which he has a photo of a person holding up a "Black Lives Matter" poster, a nice subtle reminder that Fitz is one of the good guys.

Even when the issue of sexual harassment came up, the writers made it clear that what happened between Fitz and Olivia way back when wasn't an abuse of power on Fitz's part. Olivia told him that "they crossed that line together," and more importantly, that she would certainly do it again, which she now has.

Thus, it seems very likely that by the time the series finale comes to an end, Olitz will officially be reunited. Whether that means they get married or just move into their dream home in Vermont remains to be seen, but one thing's for certain, they're meant to be.