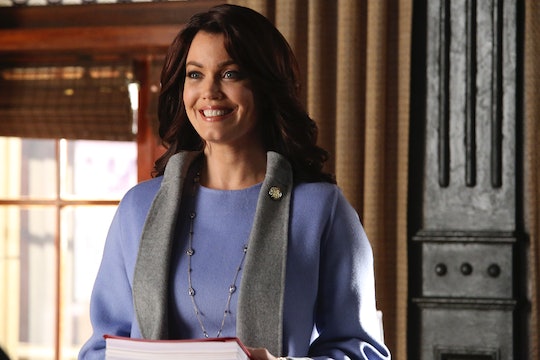 Will Olivia & Millie Become Friends In Time For Millie's Presidential Run? 'Scandal' Fans Are Split On The Idea

The midseason premiere of Scandal begins six months after the finale left off back in November. At the end of the first half of the season, Olivia Pope ended her relationship with President Fitz Grant, moving out of the White House–and presumably moving on from Fitz himself. We've known previously that Millie Grant, Fitz's now-ex wife, is also moving on — so much so that she's considering a presidential run herself. With all that in mind, one has to wonder: Will Olivia and Millie become friends in time for that exciting presidential run?

In an interview with Parade.com recently, Bellamy Young, who portrays Millie, revealed details about her character. She explained that Millie had high hopes to be one of the Republican candidates in the next presidential race. According to Young, "It’s unbelievably meta to have this going on."

While Young's character has changed dramatically since the show's start (and perhaps even this season's start), Olivia has changed as well.

Thursday night's premiere revealed a sort of new Olivia: new apartment, new wardrobe, and maybe a new outlook. Historically, Olivia has had a contentious relationship with Millie, for obvious reasons. For much of the series, Millie has had her suspicions that Fitz was in love with Olivia. Once these suspicions were confirmed, it's pretty safe to say Millie despised her, not that she took it to heart much.

Towards the end of this episode, however, it seemed that a new friendship may be blossoming between them.

Olivia agreed to aid Millie out with her autobiography as a tool in her future presidential candidacy. While Olivia was initially skeptical, she was easily convinced to help.

As Jean Bentley of E! noted, the premiere saw new beginnings of other new relationships as well. This episode marked the return of Olivia and Jake, which is not so surprising. What was surprising, however, was the budding relationship between Fitz and Abby over late-night phone calls (though, it should be noted that the calls were mostly unwanted on Abby's part).

Young also commented on the possible "Molivia" friendship to Parade.com. She herself is a fan! "I think, for me personally, because it’s the role I play," explained Young, "one of the great tragedies of the show is their never getting to be great friends because they have so much in common." About whether Olivia and Mellie could truly be friends, Young said she was less certain.

Scandal fans on Twitter voiced their opinion of this possible new team. Fans seem to be divided: Some were immediately game for the friendship, others were a bit confused:

Seeing as both Olivia and Millie love being in power, this friendship may have hope. Only time will tell as the series and Millie's presidential run proceed onward.