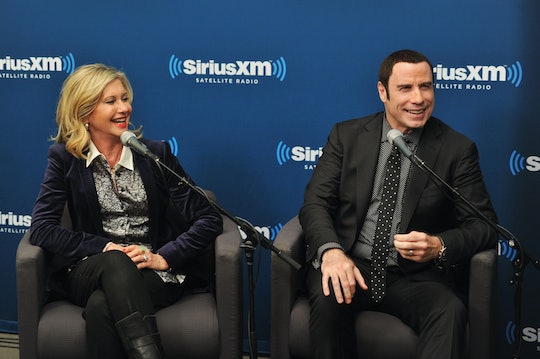 Will Olivia Newton-John Or John Travolta Appear On 'Grease: Live'? There Will Be Plenty Of Talent Either Way

Grease: Live is less than two weeks away, rehearsals are underway, and fans are hyped. With news that two actors from the original movie, Buddy Pearl (Doody) and Didi Conn (Frenchy) will be back for the live Fox remake, some are wondering whether Olivia Newton-John or John Travolta will be gracing the set as well. Unfortunately, however, it seems Newton-John and Travolta won't appear on Grease: Live. (I have a Grease conspiracy and totally think they'll make an appearance. Evidence is pointing to the contrary, but c'mon! It's Olivia Newton-John and John Travolta. I'm allowed to dream!)

Newton-John talked to E! News after a stint as a guest judge on Dancing With the Stars on Monday. "I think [Julianne Hough]'s perfect," Newton-John said of Hough, who will be playing Sandy in the Fox remake. "She's a beautiful girl and she's incredibly talented." When asked whether she'd be making an appearance on the show, Newton-John replied, "I don't think so. They don't need me, they got the new one now! It's fine. I'll stay in the screen from the old days." (Is anyone else thinking, "Well, she didn't actually say no," and using that to back up their theory?)

As for Grease's beloved Danny, Travolta told E! News in an earlier interview that Fox had asked him to act in the remake, but that he had turned it down. "Like Sound of Music and other things, to do a live production is kind of fun and it'll be interesting to see it," he said, and admitted that he'll be watching Grease: Live on Jan. 31. But when it comes to acting it? "You know, that's my history," he said, opting out. I suppose for Travolta, some things are best left in the past.

Regardless of whether my theory plays out or not, I have a feeling the roles of Danny and Sandy are in good hands. Hough not only acted in Harry Potter and the Sorcerer's Stone way back when (which in my books makes her an automatic shoo-in), she's also appeared in Footloose, Rock of Ages, and Dirty Grandpa, which comes out this year. Now, Hough has said she's rightfully nervous about playing the legendary role of Sandy, which, means she's likely going to rock it.

“I’m not nervous in a terrified way,” Hough told Us Weekly in July. “I’m nervous in an excited way. I can’t wait. Those are some big shoes to fill so it’s exciting, but it’s also a little nerve-racking. It’s such an iconic role. It’s an iconic musical. I want to do it justice. But I’m very, very excited.”

Danny's role in Grease: Live will be in capable hands, as well. Aaron Tveit has pipes that landed him a role in Les Misérables, and he's acted in Gossip Girl, Law and Order, and Graceland. I have a feeling that between Hough, Tveit, and the rest of the amazing cast of Grease: Live (Carly Rae Jepsen, Vanessa Hudgens, Jordan Fisher, Carlos Lopez), no one will even notice if Newton-John and Travolta suddenly sneak in for a minor role or two. (Let it happen, let it happen!)